The Trouble with Face-Painting 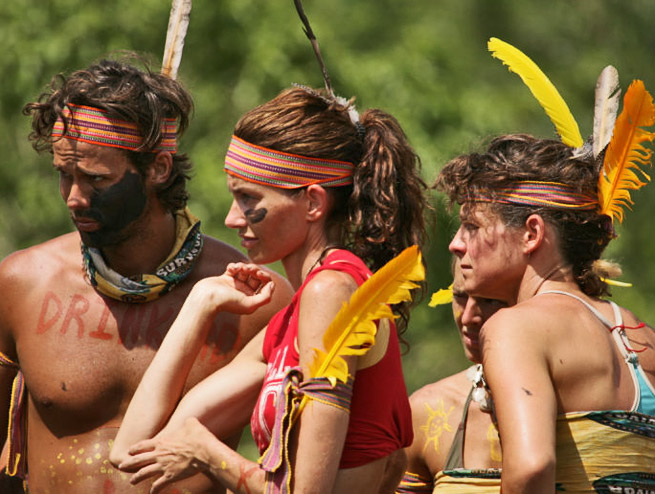 The trouble with people (especially children) painting their faces so they "resemble" Indians:

1) Indians generally considered face-painting a solemn if not sacred act. Each pattern and color had a specific symbolic meaning—a message about the wearer's status or goals. To ignore this is reduce face-painting to a fun and frivolous activity—the equivalent of a party game. It says that Indians didn't have a culture as rich and as complex as ours—that being Indian was merely a matter of putting on the proper clothes and makeup.

2) Indians generally applied face paint only when they were going into combat. Moreover, face-painting—at least the kind done in classrooms—wasn't common among all tribes. It was done mainly among the Plains Indians and others with warrior-based cultures.

The upshot is that face-painting, like a tomahawk-chopping mascot, conveys the message that all Indians were warriors. As discussed elsewhere, we generally consider people who immerse themselves in warfare—i.e., the barbarism of death and destruction—uncivilized. See any discussion of Islamic jihadists for an example.

In other words, a warrior is little more than a glorified savage. So a face-painted Indian is a warrior Indian is a savage Indian. 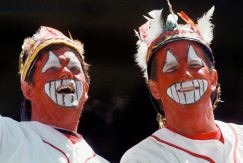 3) As with dressing up in costumes and dancing to drums and rattles, face-painting is intended to convey how exotic, strange, and unfathomable Indians were. While we were taming the wilderness and building a great nation, the thinking goes, they were playing their silly little games. No wonder we're the greatest power on earth while they're relegated to the halftime shows of sporting events.

About the only people in modern America who paint their faces for combat are military commandos and weekend warriors (e.g., football fans, paintball players). They do this to throw off the shackles of morality and propriety—to get in touch with their inner savage. Similarly, people who display such decorations as tattoos and body piercings are rejecting the modern world and its staid conventions—i.e., returning to their tribal roots.

In short, people who paint, pierce, or scar their bodies either haven't forsaken their "primitive" customs or are renewing such customs to set themselves apart. Using face-painting as a primary means of conveying Indianness is also doing this. It's a way of putting Indians in a separate and unequal category. 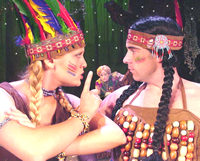 4) The whole concept of dressing up as Indians, of which painting the face is part—is hugely problematical. See Tricking or Treating Indians for a discussion of the subject.

If it isn't clear yet how face-painting is the wrong way to convey what Indian life was like, consider the alternatives. (Some) Indians fasted, sat in sweat lodges, or ran long distances for days. Why don't children do any of these things to learn about Indian cultures?

Because these activities are all things we already do in one context or another. They aren't exotic or strange enough. They don't tell us that Indians were different than us.

Readers respond
"I am aware of quite a number of non-plains tribes who painted their faces for other occasions such as mourning rituals, funeral ceremonies, puberty rites...."