As everyone knows, the public perceives comic books poorly. Comics are for kids and other emotionally arrested people. Confirming the point is a note about Black Scorpion, a new series on the Sci-Fi channel. From the LA Times, 2/20/01:

The results of this poor image are painfully clear. From the LA Times, 3/25/01:

Comics:  R.I.P.?
I'm beginning to think—or rather, to conclude, since I've thought this before—that comics are a dead or dying medium. Although creators are doing great work in places, many books seem creatively moribund. Kids aren't impressed with the hundredth battle of Spider-Man vs. the Lizard or Flash vs. Captain Cold.

These stale comics might be palatable if they still cost 12 or 15 cents, but now the base price is $2.25 or $2.50 and climbing. The key problem is that comics are too labor-intensive to be cost-effective. It takes a team a month to put a comic together, while a thick, information- and picture-filled Time or Cosmopolitan magazine needs only a week.

Comics are no longer cost-effective, but if they were, they'd still be competing with pro wrestling and syndicated series on TV and video games and pornography on the computer screen. New forms of interactive media are especially compelling because kids can participate in and even control the action. Who wants to peruse unmoving drawings when they can be part of a "live" world?

Which also suggests why the remaining comics have been terrible in recent years. Much of the top talent may be leaving the field for more lucrative jobs in advertising or new media. The creators—and the fans—who stay may be the ones fixated on traditional superhero comics—the battles with villains, monsters, and demons.

Comics professionals like Steve Gerber and Joe Casey seem to agree. For instance, Gerber has said, "Comics today appeal only to the rarefied sensibilities of a diminishing readership." And Casey has said, "It's time to clear out all the old fart, spandex nightmare, pro wrestling crap that the mainstream has been trying to pass off as entertainment and get down to the business of making comics vital again!"

Therefore, it's good that I'll have to publish PEACE PARTY as a graphic novel, Internet comic, or prose novel. Because those mediums aren't dead or dying. Books and the Internet are still expanding their business. And I want to be where the action is.

Lawyer pronounces comics "dead"
In January 2001, I met with a lawyer who's a comic book fan. He claimed comics are "dead"—not dying, but deceased. He didn't hold out much hope for graphic novels or online comics. Ruben Chavez and I discussed this lawyer's views:

>> ...there are still rays of hope, aside from what you mentioned, another example is Tomb Raider, which is now on the verge of moviedom like the X-Men before her. <<

Lara Croft was originally a video game character. Isn't the comic just exploiting her temporary popularity? I think comics based on sex and violence are doomed to fail, because eventually kids will get enough S&V from their video games or the Internet. So I'd call Tomb Raider a symptom of the disease, not a sign of a cure.

>> If comic books were completely dead, they wouldn't be making blockbuster movies about them. I hear they are getting a lot closer to producing a Spidy movie. <<

Yep, the Spidey move is in production. I wrote about the X-Men movie after I saw it. As I recall, I implied it was a rehash of an old property, which isn't what comics need. These movies may bring in people in the short term, just like Tomb Raider has, but will the people stay? Not if the comics are as bad as they are now.

It's like ABC with Who Wants to Be a Millionaire or CBS with Survivor. These shows were hits because they were fads, but the ratings (for Millionaire, at least) are starting to tumble. Meanwhile, the networks are trying desperately to clone them. They may make a few bucks, but in a couple of years, they'll be looking desperately for new products.

(As of 2002, the ratings for Millionaire have officially tumbled. That this show would burn itself out by cloning itself was as predictable as Regis's "Final answer?") 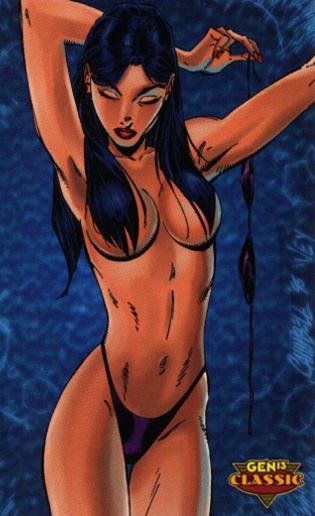 Desperately seeking salvation
>> With all the printed and electronic media competition, a person has to be a little (lot) more creative. Darn it. <<

Comics need to be a lot more creative, too. Instead, Marvel's big idea is the Ultimate Line: relaunching its titles yet again. As I said to someone, Marvel has launched "universes" many times: the original universe, the New Universe, the 2099 titles, the post-Onslaught titles, the Heroes Reborn titles, the MC2 titles, and now the Ultimate titles. The recent examples have been attempts to update (i.e., simplify or dumb down) the product for kiddies. Can you say creative bankruptcy?

I don't have a real problem with creating new versions of characters for the younger generation. But the corollary should be to let the old versions grow and change. What will Marvel do in ten years when it has two twentysomething versions of Spider-Man, both living in the present, but one with an extra 40 years of baggage?

For comics not to advance their characters like real literature does is madness. Marvel first succeeded precisely by making its heroes more human than DC's. Today's comic book publishers face competition ranging from movie franchises to book series like Harry Potter. Like their characters, these publishers must evolve or die.

Speaking of Harry Potter, it was the publishing success of the year 2000. To me that only proves the market for fantasy adventure. The trick is to tap into it with the same kind of work. That means work that's witty and intelligent enough to appeal to adults, but with the energy and sense of wonder for kids.

The solution:  Better comics
Speaking of authors, my local comic book dealer says these days people are coming into his shop asking for hot writers, not artists. It's another sign the audience for comics is maturing, edging out the fanboys who dominate the public's perception. If compelling writing can become comics' selling point rather than glossy artwork, comics stand a chance of surviving.

Or as director Ridley Scott said about his movie Gladiator (LA Times, 3/25/01): 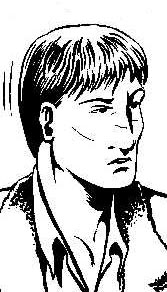 Good to see the cold hard facts confirm what people like me, Steve Gerber, and Joe Casey have been saying. The market for juvenile stories featuring spandex superheroes is moribund. Kids today are more attuned to the animated flash of MTV, music videos, and video games. But more sophisticated, literate comics—your MAUS and SANDMAN, DARK KNIGHT and WATCHMEN—will appeal to the vast pool of Baby Boomers who grew up on Curt Swan's Superman, Jack Kirby's Fantastic Four, the Batman and Star Trek TV shows, and good ol' Archie. Not to mention the Gen-Xers who began reading comics with these masterpieces.

"Etiquette Man is so nerdy that, in a twist of logic, his message of kindness is reaching teens."

"Twenty minutes of entertainment with a little message," as the article puts it. Sounds like a good comic book.

I'm not saying bad manners are a huge problem or that we need more cornball works like "Etiquette Man." I am saying our media doesn't have to pander to kids with vulgarity, sex, and violence to make a lasting impression. "Dark" characters like Rambo, the Punisher, or the latest rap poseur come and go, while "bright" characters like Superman, Luke Skywalker, and Harry Potter still inspire people.

Media moguls should rethink their conventional wisdom and try something else. Today's youths have shown they'll buy positive role models, multicultural casts, and works not steeped in sex and violence—if they're done right. In short, they'll buy more than what today's comic book publishers are offering them.

Here's what another article had to say about this generation's movie preferences. From the LA Times, 7/15/01:

Related links
Undressed for success:  superheroes without costumes
Pop culture:  time to get serious
The future of comics

Readers respond
"'Black Scorpion' might look exactly the way it does now even if it did *not* have comic book roots."
"No, comics aren't dead, just the industry!"