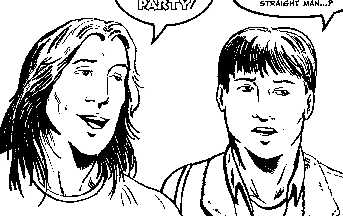 I think Internet comics will grow in popularity until they reach an equilibrium with printed comics. Companies will migrate resources to the Internet and create animated "comics" resembling today's video games. These new kinds of comics may appear on the Net or in tablet- or ebook-style PCs.

But I doubt these comics will replace printed comics entirely, and they may not replace them at all. There's little evidence that people will sit for hours in front of a screen to read. Reading books, magazines, and comics is a tactile pleasure, one that squinting at tiny print will be hard-pressed to duplicate.

Moreover, the technical challenges of producing quality art at low prices are daunting. Developing a good video game costs hundreds of thousands of dollars, making it even less cost-effective than drawing pictures by hand. But video games can recoup their development costs by selling hundreds of thousands of copies. It's been a long time since a comic sold that well.

Because slam-bang adventure is relatively easy to create, the simplest and most action-oriented comics may find a home on the Internet. But it's unlikely comics with serious themes and characterization will be cost-effective on the Net. Who's going to pay hundreds of thousands of dollars to animate scenes of two people talking, for instance?

And the perennial question for any kind of serious reading on a machine: Who's going to sit themselves in front of a screen and pay to log on or download something when picking up a book or magazine is so cheap and convenient?

So action-adventure comics may migrate to the Net while serious, Vertigo-style comics migrate to graphic novels and other hybrid forms of illustration and prose. If that happens, I'm not sure what'll remain in printed monthly comics. Maybe kiddie fare like ARCHIE, SUPERMAN ADVENTURES, and funny animal stories—which would be ironic, since that's where comics began.

These are my off-the-cuff, made-up-on-the-spot predictions, anyway.