Us Against "Them"
(A PEACE PARTY Story)

Madge Sampson stood in the checkout line at the dusty little Mom 'n' Pop. In one arm she held her basket with the family essentials: beer, chips, soda pop, crackers, disposable diapers. In the other she cradled little Midgie, who sucked placidly on her pacifier.

Horace and the children were across the street, browsing at the tourist shop. If she knew them, they had already purchased $10 worth of junk, just as they'd done at the last three places they'd visited. She sighed.

The man in front of her turned and smiled. He was a short, sinewy fellow, for whom the word "spry" might have been invented. He had longish gray hair and his face was as creased as the land outside. "Nice day," he said.

The woman in front of him moved away, so the old man stepped to the counter. He nodded to the girl in the striped shirt behind the cash register. He pointed at something and she moved to get it.

A stocky man came barreling into the store. For an instant Madge thought it was Horace in a hokey cowboy outfit, but no. The charging figure brushed passed her and the old man and slammed into the counter.

"Damn immigrants!" he hollered, taking a swipe at the girl behind the counter. "Hate 'em!"

The newcomer was dressed in plaid shirt and jeans and wore a battered Stetson. He wasn't tall, but he was as thick and tanned as a bull. He seemed to be radiating heat. 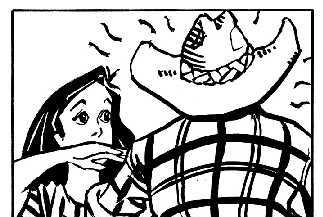 The girl shrank from him, hand covering her mouth. Before she could cry out, the old man stepped toward the newcomer and put a hand on his shoulder. "What have they done this time, Bert?" he asked gently.

Bert turned and glared at the old man. "They come from Mexico, across the sea," he bellowed. "Hundreds, thousands, millions of them. We're almost up to our ears in them."

"Don't 'Bert' me. You know how I feel. First they set up their squatters' camps, then before you know it, they're taking over our homes. Abuse our hospitality, exploit our freedom...take, take, take is all they do."

"Oh, yeah? Lying, thieving, honor means nothing to them. If they promise something, you can forget about it. Their word's not worth the paper it's written on.

"I tell you, they got no respect for the law. Swipe your clothes, your women, or just as soon kill you. They don't care nothing about human life. They come riding by and shoot you, just like you was an animal."

"Diseased, dirty, enough to make a body sick. You can't touch 'em without catching a fever. Why don't they take a bath to wash off the scum?

"And talk about foul. Their mouths are as filthy as their bodies. I mean, just look at the way they talk. Why don't they learn how to speak proper? If our language is good enough for us, why ain't it good enough for them?"

"I hear you," said the old man, full of concern. As Bert sputtered a moment, the old man glanced at Madge and winked.

"Look at their music, the way they sing and dance," said Bert, gathering steam. "Rude, crude stuff not fit for human consumption. Our children shouldn't be exposed to trash like that.

"And they're dumb," he said, waving his arms. "Ignorant. Don't know the ways of the world. Couldn't survive except by leeching off us. They don't help, don't contribute, don't do nothing but mooch. Mooch, booze, and roll in the hay." 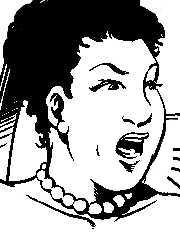 The man's face was turning red. "That's what they do, multiply like rabbits. Litter the place with babies. Soon they'll be wall-to-wall, across the land. Sex and money, that's all they think about. How to beg, borrow, or steal a buck so they can breed again."

Bert clapped his hands like a gunshot. Madge jumped and Midgie almost dropped her pacifier. "I ask you," he thundered. "What are we going to do about it?! Why don't they go back where they came from, before we start getting mad?!?"

No one moved or answered. Bert looked around once, then shook himself, like a dog sloughing off water. He stormed out the way he had come.

Madge shuddered as she stared at the dwindling figure and still-swinging door. "My g-goodness," she managed to croak. "What was that all about?"

"Oh, him," said the old man. "Pay him no mind. That's Bert Many Goats. Navajo, you know? He's been like that ever since the first white man arrived."