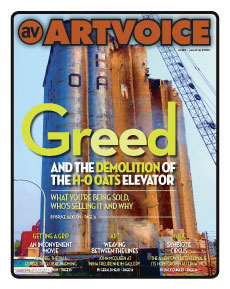 when he uses terminology that's just as biased:

In fact, it's interesting that he compared the Seneca's actions to Jewish chutzpah. Apparently this is his way of saying the Seneca are even more greedy than stereotypically greedy Jews.

Where exactly is the "greed" referred to in Jackson's title? All I see are the actions of a normal business involved in a normal development project.

If this is greed, every business in America is equally greedy. As Kara Briggs noted, that makes it wrong to single out the Seneca. If any other group was pursuing this project, we wouldn't be talking about its "greed" or "chutzpah."

The demolition of the H-O Oats elevator seems to be the main thing upsetting Jackson. But he admits the Seneca don't have plans to replace the elevator with a building yet. So where's the greed? The demolition may have been insensitive, premature, or poorly planned, but none of these are synonymous with "greedy." ArtVoice seems to have used the word "greed" solely to malign the Seneca.

Speaking of chutzpah....
You also have to admire Jackson's, er, chutzpah in dismissing historical facts:

What, so Washington's actions weren't legal? What else did Washington do that wasn't legal? Was his acceptance of the British surrender at Yorktown legal? Perhaps we're still a British colony at war with the mother country and just haven't realized it yet.

I presume Washington granted the land to the Seneca as part of a treaty or other legally binding agreement. That makes it an established and inviolable part of our history. Inviolable, that is, except to people like Jackson who pick and choose which parts of US history they accept. To them, some parts of history are respected and honored and while others are outdated and unimportant.

"United States of America founded in 1776? Okay, I'll buy that one. Slaves emancipated in 1863? Naw, that one isn't so convenient for me. Let's put that one into the category of 'it happened so long ago that it's no longer relevant today.' Why? Because I feel like it."

Is Jackson claiming that none of the Haudenosaunee tribes occupied Buffalo Creek before the Seneca? That it was truly empty land ripe for the taking? Unless this is his position, "aboriginal ownership" certainly does have a part in it. Either the Seneca or another Haudenosaunee tribe has legal and moral title to the land.

Whichever tribe it is, it doesn't belong to white interlopers like Jackson. New Yorkers have no claim to this land unless they 1) invalidate Washington's donation of it to the Seneca and 2) prove there were no previous owners. Needless to say, Jackson hasn't made this case.

You also have to love some of the other rationalizations offered by casino opponents. Take Joel Rose, who finds it more convenient to oppose an Indian casino 150 miles away than a non-Indian casino next door. Or the editors of ArtVoice, who publish anti-Indian propaganda while claiming they care only about the economics of the situation.

When people call a time-tested business like a casino a "gambling joint," they're no longer offering unbiased arguments. They're regurgitating propaganda for its shock value, not debating calmly and rationally.

Rob weighs in
Since Niman didn't write a rebuttal, as far as I know, I'll have to address some of Tallcot's spurious claims.

>> He claims that race is not biological, but political. This is another of his racist building blocks that don't hold water. Race is biological.<<

Wrong. There's no such thing as a race, biologically speaking. See Why Spawn Isn't Black for details.

>> Tribalism, of which most Indians aren't a part of, is political.<<

Well, a tribe is a political entity, not a racial one, as many court cases have determined. I don't where Tallcot gets his claim that most Indians aren't members of tribes, but it's irrelevant. Only federally recognized tribes have a government-to-government relationship with the US and only they can open casinos. Indians who aren't enrolled members of tribes have no standing to claim sovereign rights.

>> With tribalism, one group gains and maintains power over another group.<<

"Tribalism" here appears to be a synonym for government. One state uses water that your state wants to use. Another state allows abortion and your state doesn't. Another state taxes income or property at a much lower rate than yours. All these other states are exerting power over your state by interfering with its governance.

The same applies to a tribes, which exert their sovereignty much like a state. They "maintain power" over a nearby community the same way a state maintains power over a community just across its border. For instance, Nebraska permits the town of Whiteclay to operate liquor stores near the Pine Ridge reservation, which lets it "maintain power" over the Lakotas' struggle against alcoholism.

>> As for insinuating words — those such as "First" or "Native" American implying a right or privilege should increasingly come under scrutiny.<<

The words "First" and "Native" aren't "insinuating" anything they haven't insinuated for decades.

>> First, because the implication is bogus<<

Which implication is that? That tribes don't have sovereign rights? Sure they do, as the Supreme Court has ruled since the 1820s.

>> secondly because evidence has shown that Indians weren't necessarily "First" or "Native".<<

Talk about bogus. See Kennewick Man, Captain Picard, and Political Correctness for a demolition of this claim.

>> In New York State the Iroquois merely assimilated and exterminated the tribes that were here before them.<<

>> Four of the six Iroquois, or Haudenosaunee, tribes fought on the losing side in the American Revolution and some again in the War of 1812. I'd call that being defeated.<<

I wouldn't. Being defeated is when you surrender and lay down your arms at the point of a bayonet. If you retreat while your allies are defeated, you may have lost a battle, but you haven't lost the war. Your side may be defeated even though you haven't been.

>> Niman ... implies that all anti gambling forces are anti-Indian. That sure sounds racist to me.<<

Tallcot may need to get his hearing checked, because there's no racism in this claim The claim may not be correct, but it doesn't say anything about the racial makeup of the anti-gambling forces.

More important, Niman's claim appears to be true, judging by Tallcot's statements. Tallcot is criticizing "tribalism," sovereignty, and the well-established primacy of Indians. None of this has anything to do with being anti-casino; it's all anti-Indian.

UCE for equality of races, not governments
>> Upstate Citizens for EQUALITY promotes equality under the law for all races, including Indians.<<

>> Indian identity is not entwined with sovereignty, no more so than Irish, Italian, German, or African-American.<<

The identity of Indians who are enrolled in recognized tribes certainly is entwined with sovereignty. Not all Indians have sovereign rights but many do.

>> Dan Warren's quote that he supports "either the rescission or full legalized gambling, but not the granting of a monopoly" is UCE's position, period.<<

So it isn't UCE's position that sovereign Indian rights are "bogus"? Is Tallcot speaking without permission from UCE? Falsifying its position? Because he just asserted a lot more than opposition to an Indian monopoly on casinos.

>> Neither Dan, nor I, nor is UCE opposed to Indians running casinos.<<

But you are opposed to Indians having sovereign rights, which makes you anti-Indian.

If you don't like the status quo, with Indians having a monopoly on Class III gaming, change the law so everyone can operate Class III games. Quit singling out Indians for exercising the opportunity given to them by US lawmakers.

>> He states that "Without sovereignty, Indian nations would cease to exist", and implies there aren't strong enough relationships within the tribes to hold them together." However, the Amish and Mennonites hold their cultures together as a unit quite well.<<

Meanwhile, hundreds of subcultures have been assimilated into the US and largely disappeared. Indians are right to do as much as they can to preserve their cultures.

>> Running a corporation that has been granted a monopoly hardly warrants the additional granting of sovereign immunity to exist.<<