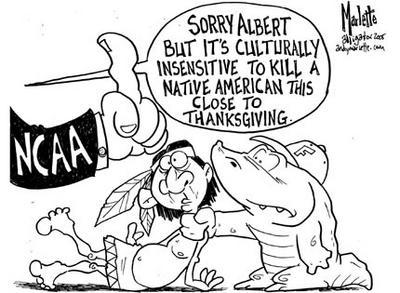 A letter to the university

Addendum (6/7/06)
Ms. Tucker wrote again after I asked her for another copy of the offending image:

The following is what Tucker referred to when she said the Alligator offered a so-called apology but not a real apology:

I believe Andy Marlette (nephew of Pulitzer Prize-winning cartoonist Doug Marlette, was trying to make a point about America's cultural insensitivity to Indians. In particular, about the NCAA's attempt to ban the Seminoles and other mascots in post-season play. Ironically, he did it in a way that itself was culturally insensitive, which overshadowed his point.

It's generally not a good idea to depict the victim of a horrible crime being victimized again, even if the message is satirical. Similarly, it probably should be off-limits to show a black being lynched or a Jew being gassed. Inevitably, people will see the crime and miss the message.

Also, Marlette drew a generic Indian, not one who looked like a Seminole. This approach is understandable, since the cartoon doesn't make sense unless you can recognize the Indian. But it's still stereotypical.

Incidentally, the American Indian population is about 1% of the US total, not 0.1%.