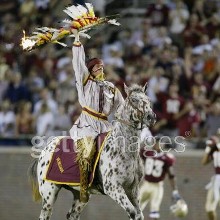 Rob's reply
The most offensive portion of this entire essay is the "Sports Curmudgeon's" stupid ignorance of the widespread Native antipathy toward Indian mascots. The so-called "Thought Police" are indeed advocating for the many tribes and organizations who have come out against such mascots.

Read the evidence, Curmudgeon, and weep at your ignorance of what many Natives and other minorities believe:

As for the Curmudgeon's few examples, they're easily dismissed. As part of the Great Lakes Intertribal Council, several Chippewa tribes have voted against CMU's "Chippewa" mascot name. William and Mary and UNC-Pembroke are minor offenders in the mascot battle. The major offenders are teams such as the Savages, Redskins, Redmen, Fighting Illini, and Fighting Sioux—which the Curmudgeon conveniently failed to address.

So the Curmudgeon's four examples amount to one example. Great. There are some 1,200 schools that still have Indian mascots and the Curmudgeon points to one with tribal support. What about the other 1,199, doofus?

The white-majority NCAA isn't telling Indians what to think, which might indeed be a racist act. It's supporting what Indians already think. How is that a racist act?

As for the "political correctness" charge, see Political Correctness Defined for more on the subject.