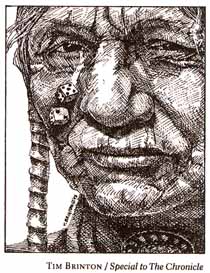 A series of articles on the Seneca Nation in the Buffalo News triggered charges of racism and stereotyping. Some articles in the series:

Rob's comment
The subtext of the Buffalo News series is that the Seneca are greedy, corrupt, and immoral, or the disparities in income wouldn't exist. The implication is that Indians are less humane, or maybe less human, than "we" are.

This is ironic considering Indian societies were and arguably still are much more egalitarian than Western societies. Multimillionaires like George W. Bush, Queen Elizabeth II, and Pope John Paul II sit in their palaces while homeless people scrounge for food outside, but no one holds these rich white people to the same standard.