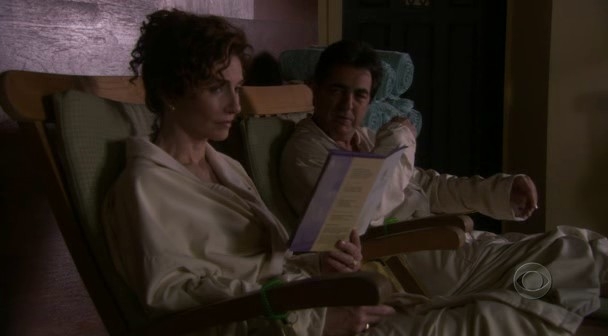 In the 1/16 episode of Joan of Arcadia, Joan's parents Helen and Will are vacationing at a spa. Helen is enjoying herself; Will isn't. The following dialog ensues:

Here we see the twin poles of Native stereotyping. Will's first presumption is that Indians are savage killers who torture Anglos to death. His second presumption is they're all making money off Anglos in casinos.

Either way, Indians stand opposed to the norm—which Will and Helen presumably represent. Either way, they're doing something we don't like, something distasteful if not harmful. Clearly, Indians are "them" and white, Anglo-Saxon Protestants (or in Will's case, white Italian American Catholics) are "us."

Joan is a fine show overall, with an enlightened view of God. But the characters are mostly white. (The exceptions so far are son Kevin's boss/girlfriend Rebecca and Will's police partner. Both are black women, although Rebecca is light-skinned and could pass for white). So far there isn't much of a multicultural viewpoint. Certainly no one is posing tough questions about God (or to God, since Joan speaks to him/her/it directly).

The creators' take on Indians is startling. Would any show dare to conjecture what a black or Jewish spa treatment was? Yet Indians are considered fair game. It's a classic example of cultural myopia: Indians are either gone, relegated to history, or so far out of the mainstream they're invisible and irrelevant.

That's kind of how Americans handle every "problem," come to think of it. Global warming? Species extinctions? Resource shortages? Out of sight, out of mind. We'll deal with it if we have to, if it becomes critical, but not before then.

A contrary opinion
And my response:

>> I thought that his comments were meant to attack the way European Americans treat Native Americans. <<

I don't see how that could be. The father defined the "Native American treatment" as "drag[ging] us through the sand by our hair until our skin is flayed." That would be how Natives treated non-Natives, according to the father, not the other way around.

>> When I read it, I imagined he was referring to the savage treatment of Native Americans <<

In the stereotypical but commonplace view of history, it was the Natives who tortured non-Natives. Not the other way around, again.

>> I can see your point, but I thought it might be useful to look at it from another perspective as well. <<