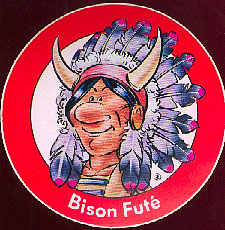 In a recent print ad, the French company Renault showed a car running over a "Cheyenne brave." When Indian Country Today protested this ad, Renault apologized as follows:

The French government apparently created Bison Futé (Smart Bison) as a symbol for its traffic services in 1976 (left). The original Bison Futé was a stereotypical Indian chief. At least he looked human in a cartoonish sort of way.

In 1990, after American Indians protested, the French revised Bison Futé, making him less recognizably human (right). Now he looked half-human and half-animal, like something out of a Pogo or L'il Abner comic strip. A big-nosed anteater or aardvark, maybe. If the French thought this was a step forward, it wasn't. Just the opposite.

Now we have a clearcut example of how Indian mascots dehumanize Indians. The French started with a semi-realistic Bison Futé. Then they made Bison Futé into a animal-like "thing." Because Bison Futé was nothing more than a slapstick critter, sort of an Indian Gumby, Renault thought it would be okay to show an Indian getting flattened. French readers would understand the clay "Indian" was a reference to Bison Futé who was so unrealistic he too could be squished without harm.

This is just what happens with school mascots. A real Indian gets turned into a two-dimensional stereotype. The stereotype is further neutered by being associated with trivial sports contests. Then, in the name of fun 'n' games, people feel free to abuse the mascot, to express their disdain or hostility toward it. In real life they call for "scalping the Indians." In Renault's ad, they go ahead and kill the Indian.

People think they're honoring Indians by turning them into two-dimension mascots, but they're not. What they're doing is pigeonholing them, diminishing them, rendering them safe and harmless. A real Indian warrior might strike you dead if you broke your treaties with him and destroyed his people. A cartoon Indian warrior you can taunt, threaten, or run over with impunity.