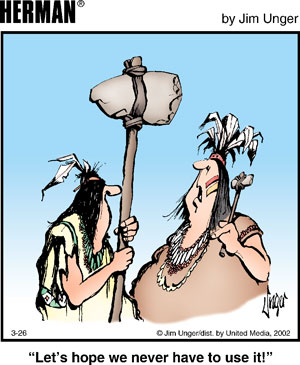 This cartoon is making some point about bigger weapons detering warfare. That's not the problem here. The problem is the use of classic stereotypes: the feathers (Lord, has anyone ever depicted an Indian without feathers sticking up from the back of his head?), the war paint, and the tomahawk or war-club.

As a primitive weapon, the tomahawk implies Indians were (and are?) both preindustrial and warlike. Why not show an Indian brandishing a rifle, since Indians used firearms almost as soon as they became available? Or flying an F-16, since Indians like the fictional Joe Mack serve in today's military? Why not show an Indian brandishing a huge peace pipe, for that matter, to convey that Indians just wanted the Anglos to leave them alone in peace?

Because those images wouldn't fit our image of the Indian as primitive and savage, obviously. Such depictions have had an insidious effect ever since Columbus first bumbled into the Americas. By portraying Indians as uncivilized, little better than squabbling children, we've justified all our crimes against them. We know what's best for them, and if we have to take away their toys and make them go sit in the corner, well, too bad.

Now that Tumbleweeds is gone (I hope) and Gary Larson has stopped doing The Far Side, Jim Unger's Herman is the frontrunner for the most stereotypical cartoon about Indians. See Native Comic Strips vs. Comic Books for more examples.