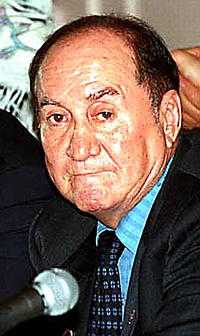 Rob's reply
The main problem with these postings is their attitude toward Coon Come. The idea that he should be a "good Indian" and not protest injustice. The day when indigenous people have to act like the Great White Father tells them to is long gone. Now it's the GWF who'd better act—if he doesn't want worldwide censure.

I don't know if Indian Affairs Minister Bob Nault and columnist Brian Kappler seriously think Coon Come is hurting his cause, or if they're just mad because he's embarrassing them in public. But it's fallacious to claim negotiations can solve every problem and protests can't. For counterexamples, start with the civil rights and anti-war movements of the '60s.

When people won't listen, you need to make them listen. That may mean going over the heads of the people involved and appealing to a national or international audience for support. Or it may mean going beyond appeals to action such as boycotts or lawsuits.

By attacking Coon Come rather than addressing his complains, Nault and Kappler seek to shift the blame. As far as they're concerned, it seems, racism in Canada no longer exists. All the problems have been or are being solved. By raising a stink, they imply, Coon Come is creating problems where none exist.

That spending money necessarily solves problems—and eliminates responsibility for causing those problems—is another fallacy. We've spent billions on health, education, and welfare for minorities in the US, yet inequalities persist. We've lifted many people out of abject poverty...but we've also wasted money on unproductive programs.

What's the point? If the problems persist, so must the spending. It should be targeted, productive spending, with checks and balances to ensure it isn't wasted. But poverty won't go away if we stop trying to alleviate it. (Don't get me started about how "free markets" will create a "rising tide" to lift everyone. Three words: The Great Depression.)

To show how this works, here's one example. Blacks in America have received either no education or inferior education for 200+ years. Is 30 years of "equal" spending enough to counteract that? Judging by the results, apparently not.

As many have said, if you cripple a minority person and then put him at the starting line with a health white person, that isn't a fair race. The same analogy applies to government spending on minority problems. If the present situation took 200+ years of subpar spending to create, it may take 200+ years of spending more on minorities—giving them a superior education—to create the mythical "level playing field."

Another problem with Nault's and Kappler's complaints is even more blatant. Coon Come didn't say the government wasn't spending money. He said Canadian society was racist. There's only a weak, vague connection between government spending and societal attitudes. Canada could give every citizen a billion dollars and it wouldn't necessarily change anyone's racist attitudes.

Down to brass tacks
I don't know much about the situation in Canada, but Kappler's rhetorical approach is transparent. Most of his claims put a positive spin on the situation, or try to. Let's spin them the other way:

Kappler asks, "Is this a picture of a systematically racist society? You decide." Nault says, "There's no proof of this in modern time -- that the Canadian government and the general population are racist towards aboriginal people." My response: Neither of you have proved Canada's government and society isn't racist. If you have the proof, cough it up.