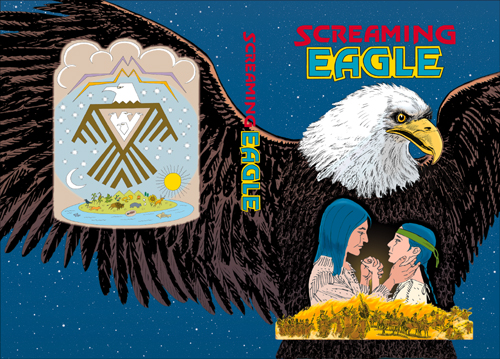 An expanded version of my Indian Comics Irregular essay On the Fly with Screaming Eagle:

In 1998, Discovery Comics published a hardcover graphic novel called SCREAMING EAGLE. Written by Scott Deschaine and illustrated by Mike Roy, it's a nicely packaged work of art. At 291 pages, it may be the longest graphic story ever to feature Indians. That alone makes it worth a look.

SCREAMING EAGLE tells a mythical version of Native history—from the early pioneering days to the end of the Indian wars. Not coincidentally, that period coincides with the life of the story's fictional hero.

At the onset, white trappers shoot a bald eagle, then the boy Screaming Eagle. The eagle's and boy's spirits merge and Screaming Eagle comes back to life. He now has the power to turn into his namesake guardian spirit.

Screaming Eagle becomes the focal point for this simplified version of events. He's there to counsel people in war and peace. He's the embodiment of all the great Indian leaders, from Tecumseh to Geronimo.

In a fantasy sort of way, the story parallels the real American history. Three episodes show how it goes:

In the first, white men trick an Indian trading furs into signing a paper. They then proclaim him a "chief" who gave them title to the land. Screaming Eagle is outraged at this injustice and threatens the interlopers.

In the second, Indians are raiding farms that have encroached on their land. Screaming Eagles says these are only skirmishes, not a real war. But when he flies (literally) to survey the scene, he sees the white men have marshaled a huge force. He urges the Indians to retreat because fighting would be suicidal.

In the third, the US Army negotiates a treaty with a band of Indians. Screaming Eagle advises caution but foresees an unhappy outcome. Then an Indian reaches for a knife, a white man claims he's drawing a gun, and a firefight erupts. Government officials reluctantly conclude they "cannot live with the red man" and must hunt the Indians down.

In rough form, this is how 19th century American history unfolded. Screaming Eagle mirrors the many chiefs who first went to war and then sued for peace. The story's intent is honorable: to show how white men and Indians misunderstood and fought each other until the whites were too powerful to overcome.

To the creators' credit, the work isn't too biased. Not all the Anglos are stupid or evil, not all the Indians noble or wise. Screaming Eagle's position changes from fight to flee—not unlike that of the great Chief Joseph's. 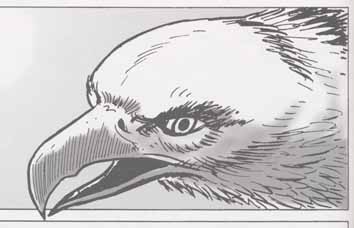 Plains Indian Clichés
But beyond its worthy message, the story has some major problems. Most important, it's a mishmash of generic Indian clichés.

When we first see Screaming Eagle, he's sitting atop a mesa on a vision quest. The Indians appear to be Plains Indians, except for a few at the end who look like Apaches. They live in tipis, wear buckskins and breechcloths, and smoke a sacred pipe.

No real Indian person, place, or thing is named. The one non-generic element is the Serpent Mound, which is in Ohio, far from the Plains. As the story apparently moves west, neither the landscapes nor cultures vary. Toward the end, the Indians are still living in tipis in a forest—and playing lacrosse, to boot.

Having run out of options, Screaming Eagle flies his family to the "cold dry lands." He then wreaks vengeance on a white man's town. He carries off the trapper who started the conflict and feeds him to his children, who have transmogrified into eaglets. Finally he soars into the sunset, never to be seen again.

Between some chaste nudity, an implied sex scene, and the bloodthirsty ending, SCREAMING EAGLE probably isn't for youngsters. Even less acceptable may be the implication that Indians have vanished: merged into the landscape, become one with nature, disappeared into some mythic time and place. The old Indian who appears at the end, narrating the story to a circle of campers, doesn't change this elegaic feeling.

Despite its sometimes beautiful art, SCREAMING EAGLE misses the mark. The fairy-tale version of history is too simple for adults, yet too graphic for children. It's not at all clear who the target audience is.

If SCREAMING EAGLE ultimately fails, it's a noteworthy effort. Fans of graphic Indian-themed fiction may want to check it out. For more information or to order it, go to Screaming Eagle Lands in Comic Book Stores.

Readers respond
Deschaine:  "I really meant to show that [the Indians'] presence is with us, all around us, and has transformed our history and will continue to form our future."