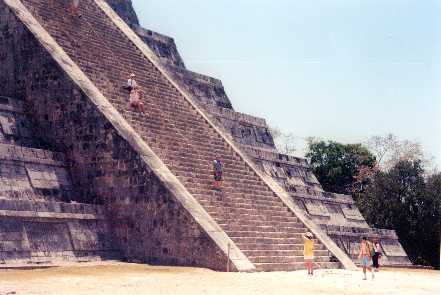 Another response to Greek Lies, Historic Truth, with my replies:

Why are you defending the Greeks if you're Xerxes, Ruler of Persia? Didn't the Greeks kick your butt? <g>

>> Yes Egypt is older but your claims that had there been no Egypt or Sumer etc; there would be none of the spectacular accomplishments by the Greeks. You are thoroughly mistaken. <<

Based on what...your opinion? Your belief that the Greek civilization would've evolved without any antecedents or influences is totally unprovable. But if you think you can prove it, by all means try.

Ancient Greece's predecessors
A brief history of Greece and the Mediterranean may be instructive. The quotes are from the Time-Life book Barbarian Tides:

The greatest of the first primitive Greek cultures was Mycenae:

A volcanic explosion decimated the Minoan civilization, or classic Greek culture might never have been born. After the collapse, the Mycenaeans briefly ruled the Aegean. But, continues Barbarian Tides, "when trade with Egypt fell off abruptly after 1300 BC, the Mycenaean domains suffered an economic decline that emphasized how dependent they were on older, richer civilizations."

While the Indo-European people collectively known as the Dorians overran the Greek peninsula:

To sum it up, classic Greek culture derived from Indo-European roots overlaid with Cretan civilization. The Minoans, in turn, were heavily influenced by their Egyptian neighbors to the south. So Egypt and other civilizations contributed directly or indirectly to the Greeks.

Going forward in time, Roman civilization was a mixture of Etruscan and Greek culture as modified by people ranging from Germany to Asia Minor to Palestine to Egypt to Carthage (a Phoenician city). Then Rome "fell" and its culture mixed with Europe's native Anglo-Saxon cultures and others. So many, many people, not just the Greeks, contributed to what we call Western civilization.

If Greek civilization had so much influence on the present world, why are there no temples to Zeus in the US?

The Greek city-states were insular compared to the later Hellenistic and Roman empires, so it's not surprising they didn't show many overt influences. When Alexander and the Romans conquered Egypt, they were influenced by Egypt as much as they influenced it. If you want architectural influences, look at the Roman obelisks or the pyramid on the back of the dollar bill. If you want religious influences, the Concise Columbia Encyclopedia notes that

Since my thesis is that the present-day world is a mix of Greek and non-Greek influences, I don't have to show the Egyptian influence went directly through Greece. To varying degrees, Egypt influenced the Hebrews, Minoans, Greeks, Romans, and other peoples of the Mediterranean, all of whom contributed to Western civilization.

>> Why are Hieroglyphics not the language of record of those times? <<

Why isn't Greek the language of record now?

Your statement is ironic considering the ancestry of the "Greek" alphabet. The letters we now use took shape in the Near East and developed in Phoenicia. The very word "alphabet" comes from the Hebrew words "aleph" and "beth." The non-Western origins of our writing system are clear.

>> Yet, there is no archeological evidence to support your claims of these cultures having influence on Greek civilization. <<

Plenty of archaeological evidence shows the influence of the neighboring cultures in Crete and Asia Minor. As for Egypt's influence, the Egyptian civilization was already 3,000 years old by the time of Pericles. It lay dormant or dying after several millennia of expansion and contraction. I wouldn't expect a culture that distant in time or space to directly influence ancient Greece any more than I'd expect ancient Greece to directly influence present-day Great Britain, Morocco, or Afghanistan.

One of my sources makes a similar point. From The Culture of Ancient Egypt by John A. Wilson:

But the evidence of outside influence does exist. As L.S. Stavrianos writes in Man's Past and Present: A Global History:

Here's more on the Egyptians' knowledge of medicine, from the NY Times:

In his book, Wilson also discusses the limits of Egyptian influence, but we needn't go into them here. People like you are already too quick to claim Greece invented everything.

A mix of Greek and Hebrew
So Egypt influenced the Greeks and the Hebrews, who both contributed significantly to Western civlization. As Wilson, who was the Andrew MacLeish Distinguished Service Professor at the Oriental Institute and Department of Near Eastern Languages and Civilizations, the University of Chicago, puts it:

And from a book review of The Mind of Egypt: History and Meaning in the Time of the Pharaohs by Jan Assmann—in the LA Times, 4/21/02:

>> When compared to others, the Greek civilization stands apart and THAT is why, to this very day, people marvel at its uniqueness! <<

As I wrote in Multicultural Origins of Civilization in response to a similar claim:

>> When Alexander conquered Greece, he adopted Greek civilization. Why? Cause it was better than the Macedonian in all things cultural. <<

Here's what Stavrianos says about the spread of Hellenization:

That seems clear enough. An amalgam is essentially what I said.

>> When other cultures were subjugated, they were not FORCED to adopt Hellenistic civilization, they ate it up willingly because it was much superior to their own. These are documented FACTS from writers in these subjugated lands. You can read the records of Hellenized Parthians, Egyptians and Hebrews that attest to this fact. <<

You can quote the records to me if you want me to consider them in this debate.

I'd rather read the views of the people who weren't Hellenized, since Stavrianos notes it was a time of great upheaval and confusion. The non-converts would be more objective about the shortcomings of Hellenization.

Since Persia, aka Iran, was once the center of Hellenistic culture but is now rabidly Islamic, I guess the Hellenistic culture didn't sink in deeply or have much permanent effect. That would be consistent with Stavrianos's claims that local beliefs co-opted and changed Hellenization.

>> But, in your biased view, you probably think they were forced to swallow Greek culture at sword point. <<

A professional historian used the word "imposed," above. I'll go with his expert opinion over yours.

Renaissance rediscovered Greece
>> It was only revived in the renaissance by thinkers who RE-DISCOVERED the wealth of Greek knowledge in science, art, medicine etc. <<

Tell me something I don't know. So we agree Greek civilization didn't influence Europe for a thousand years while other cultures did. In addition, much of that Greek "wealth" was preserved by Islamic scholars who added their own knowledge to the mix. That would make Renaissance Europe a mix of Greek and non-Greek influences, as I said.

Besides, it's mostly a myth that the Middle Ages were "Dark" Ages. Many evolutionary changes happened over the medieval period, leading to the flowering we call the Renaissance. As Michael Crichton put it in his well-researhced novel Timeline:

These developments were largely based on native European tradition and ingenuity. Other influences came from the Mongol invaders, the Islamic empires to the south, and trade with Asia. They did not come directly from Greece, since—as you said—Greek civilization was lost and buried.

>> But the Greeks were the FIRST to apply rational thought to them, turning them into the true science that we know today. <<

They were the first to apply rational thought systematically, perhaps. As noted above, the mathematics needed to build the pyramids and the medical knowledge needed to perform surgery were plainly rational. You can't do math "irrationally" and come up with correct answers.

Professor Sabatino Moscati, Director of the Center of Semitic Studies at the University of Rome, addresses the issue of Oriental rationality in his book The Face of the Ancient Orient:

I covered your point in backhanded fashion when I wrote that "...'scientific astronomy,' like 'scientific medicine,' is distinct from astronomy or medicine." That acknowledges the Greek development of the sciences. This development built upon the knowledge amassed in the Near East and Egypt. It did not spring miraculously from Zeus's brow or belly button.

>> Thus we have the miracle of Western civilization. <<

Which I've addressed in postings such as:

Multicultural origins of civilization
This ain't no party, this ain't no disco:  a Columbus Day rant
America's exceptional values

Who's in denial?
>> But to deny the achievements of one of the greatest in history to make one feel better about his own culture is hollow. <<

I didn't deny the Greeks' achievements, I put them in context. And what do you think "my own" culture is, exactly? FYI, I'm a white Anglo-Saxon Protestant whose roots are English and German—as you might've guessed from the name Schmidt.

>> Using your thought process, I can easily say that since the ancient Greeks were the most advanced sea faring people of their time, traveling as far as Ireland, it's not such a stretch of the imagination to say that they just may have brought their knowledge of astronomy and math to the ancient Incas! <<

The most advanced sea-faring people for their time...if you claim the more advanced Phoenicians were of a different time.

In fact, it's more likely the sea-faring Phoenicians reached the New World than the shore-hugging Greeks did. But—unfortunately for you—that would be another non-Greek influence that predated classical Greek civilization. Since you're the only one who seems uncomfortable with history here, I guess you won't want to admit that possibility.

Don't you? By denying the Mesopotamian, Egyptian, and Minoan influences on Greece, it sure seems like it.

>> In closing, I must say that I have found most of the articles on your site very informative and have gained an insight into a culture I must honestly say I had no exposure to. <<

>> Your culture is just as valid as mine sir, and I would never think to try to diminish the great aspects of yours <<

I'm glad you approve of my white, middle-class, Anglo-Saxon culture. My relatives who descended from William Palmer of Connecticut in 1636 will be glad to hear it.

But you're not trying to diminish other cultures by saying the Greeks invented everything important? Uh-huh, sure you're not.

>> please try to apply that ethos to your dealings with others. We are given the respect we give! <<

I've given Greek civilization exactly the respect it deserves, since I've stuck to the verified evidence. Now let's pay our respects to its predecessors:

From Standing Guard in the University of Chicago magazine, December 2003:

I suspect we could find hundreds if not thousands of books with similar conclusions. For instance, Ancestor of the West: Writing, Reasoning, and Religion in Mesopotamia, Elam, and Greece. One reviewer wrote that this book stresses "the intelligence, culture, and religion that Mesopotamia has bequeathed to the modern world."

So I'm not trying to diminish Greek culture so much as the prejudices of people who worship it blindly. I hope this message has helped you see the light.