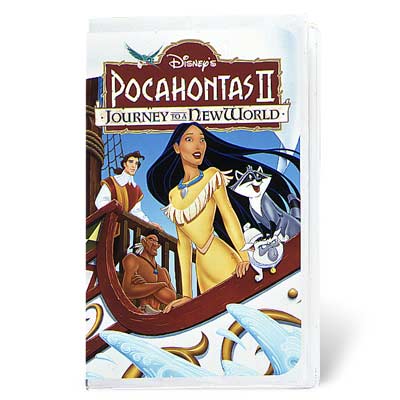 Pocahontas II: Journey to a New World is Disney's direct-to-video sequel to Pocahontas. Since more people are likely to see this than other Native-themed products such as PEACE PARTY, let's examine the message it conveys.

The curtain opens with John Smith's presumed death in England. In America Pocahontas grieves for her love and wonders what's next. In reality Pocahontas may have grieved because she didn't know Smith's fate after he returned to England. From there the movie and reality diverge.

We can attribute many of these changes to the demands of movie-making. They aren't much worse than the flaws in any historical movie. But one change is fundamental, and fundamentally wrong:

Much in the movie serves to redeem the Europeans. Not only are their colonists and colony healthy, but everything about them is rosy. The ships aren't cramped stinkholes, but broad-beamed sea-chariots. London isn't dirty, smelly, and diseased, but a fairyland (Disney-land?) of sights and experiences. Except for the bear-baiting and the frippery of the ball, England is a model of civilization.

A paved-over, poverty-stricken city couldn't have seemed natural to Native visitors like Pocahontas. One suspects they were appalled by the squalor and deprivation of 16th-century England. If they weren't, a modern observer undoubtedly would've been—if Disney had shown it like it was.

But Pocahontas II portrays the English as essentially noble. This despite the fact that the country was a tyranny of king and church, not the democracy we know today. What the movie ignores is the English belief in divine right—the right to remake the world in their image.

Far from being an aberration in a few bad men, this belief was pervasive. As far as the English were concerned, America was empty land, theirs for the taking. They were willing to kill "interfering" Natives, or hold an innocent girl hostage, to achieve their aims.

Regardless of its quality, a movie that denies this is a historical cheat.

Artistically speaking, the film has the usual Disney sheen. It's almost as cute as the original. Pocahontas is a babe, Rolfe and Smith are hunks, and the animals are a barrel of monkeys.

Most important, the notion of respecting other cultures remains intact. That's always valid and noteworthy. So enjoy the characters' antics, but don't overlook the subliminal message: that "civilization" and conquest are ennobling enterprises.

Buy it now
Curious about the movie Pocahontas II? Click here to get it now.