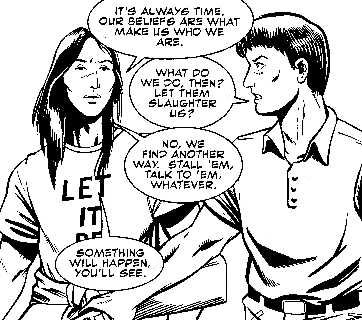 Perhaps this isn't the first comic magazine featuring Native American superheroes, but it's the first I've seen where those heroes weren't incredibly muscular, lack weapons capable of destroying world and talked of bird-watching and girls. And the setting? Places familiar to the readers of the Navajo-Hopi Observer.

Billy Honanie (Rain Falling) and Drew Quyatt (Snake Standing), modeled after Pueblo Tribes, are cousins—one a lawyer who works in Phoenix, the other reservation-raised.

Drew, long-haired and traditional, and Billy, sporting a more L.L. Bean wardrobe, are involved in an accident which tosses them into a vision where they are empowered by a mysterious messenger from the ancient gods.

One of the evils the young men face? Coal mining and the detrimental effects of environmental destruction. And let's face it, at this point the draining of the N-aquifer poses a great threat to the Hopi than the "super villains" and "beings" from outer space that Superman battles. This is a point well made in Peace Party.

True to the title of the comic, our two heroes look for peaceful solutions; instead of carrying guns or knives, the young men employ natural visions—rattlesnakes, mirages—to distract their enemies. This is not to say the Drew and Billy are "wusses"; violence is simply not their first choice.

Author Bob Schmidt, a non-Indian, worked as a business programmer/analyst before he began a career as a freelance writer in 1993. To ensure authenticity, several Native Americans service on the Board of Advisors for Peace Party. These include Steve Russell (Cherokee) and Lorenzo Baca (Isleta/Mescalero Apache).

The comic has gotten a lot of attention and approval. Actor Ryan Black, Dale Deforest, Russell Coker and Indian Country Today are just a few who have recognized Peace Party. Michael Horse, whose mother was an animator for Bambi, describes the comic as "wonderful."

Peace Party teaches cultural awareness, and shows believable Native American characters who challenge the commonly held stereotypes. "As the title indicates, it's a sane alternative to all the sex and violence—steeped in products on the market today," Schmidt explained in a press release.

To learn more about Peace Party, check out their website at http://members.xoom.com/peaceparty.