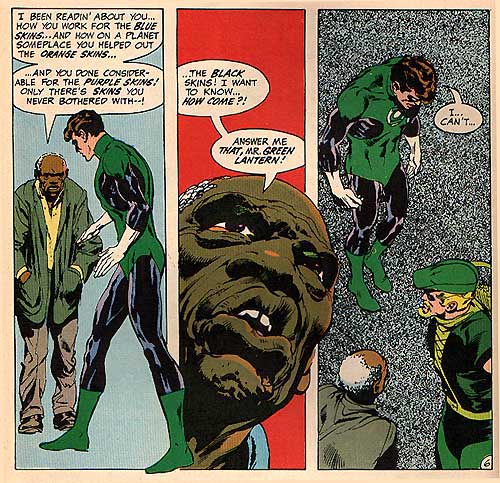 I wrote the following letter to Captain Comics, aka Andrew Smith, who writes a column in the Comic Buyer's Guide:

Readers respond
The good Captain published my letter in Comic Buyer's Guide #1493 (6/28/02). A few months later, the Captain published two letters dismissing the importance of GL #76. I then wrote another letter (10/22/02): 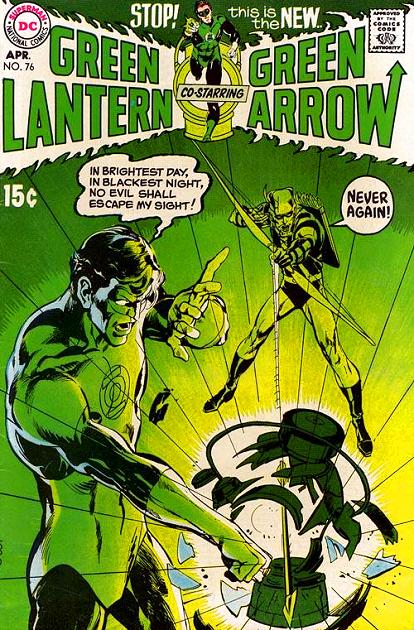 Early years vs. now
Another comment to the Captain:

Incidentally, I don't necessarily agree that Green Lantern tackled mundane crimes only in his early years. I think that attitude continues today.

Look at the latest story arc involving the beating of Kyle Rayner's gay friend. You could say, "Wow, GL is finally tackling an important social issue: homophobia." Or you could say, "What took GL so long? People have been beating and jailing and stoning gays for centuries. It's undoubtedly happening to hundreds of people right now in repressive countries around the world."

Should we give GL credit for devoting his limited time to helping one gay friend? Who still happens to be a (relatively) rich, white American? Or should we excoriate him for not doing something about the worldwide problem his friend represents? Why is Kyle's pal getting the full benefit of GL's ring and not Abdul in Saudi Arabia, Eliza in Nigeria, and countless others?

Answer: Because GL isn't saving the world. He's saving the people he deems worth saving. If he happens to save other people along the way, great, but that isn't his primary goal.

He literally could ask his ring to identify the greatest threat to the greatest number of people. You can bet it wouldn't be two homophobic thugs in a big-city alleyway. Or if you don't believe the ring has that power, he could use it to set up a worldwide system of monitors and informants. But he doesn't do that or anything like it. Instead, he sits on the couch, pops a beer, and watches TV until the media announces a threat to upper-middle-class America.

The blind leading the blind...that can be the epitaph of superhero comics if they fade into oblivion. These comics could be so much more, as series like WATCHMEN and DARK KNIGHT RETURNS prove. But we're still talking about comics from 15 and 30 years ago because not much has changed. What has the medium done for us lately?