The contretemps started with a series of offensive incidents at Dartmouth University. It culminated with Athletic Director Josie Harper's apology for scheduling a game with UND's "Fighting Sioux." Then the backlash began.

The first editorial was bad enough. From the New Hampshire Union Leader:

Rob's reply
Most of the claims about what North Dakota's tribes and Indians think about the "Fighting Sioux" are false or misleading. See Fighting the Fighting Sioux and Team Names and Mascots for the real story.

Calling people who protest a stereotype "offendians" is stereotypical. As is the phrase "Fighting Sioux," of course.

Conservative rag chimes in
Next the Dartmouth Review offered its take on the controversy. To make sure the Native protesters got the point, the magazine portrayed them as scalp-waving savages on its cover. How dare those uncivilized animals challenge their Anglo-American betters, it seemd to say. 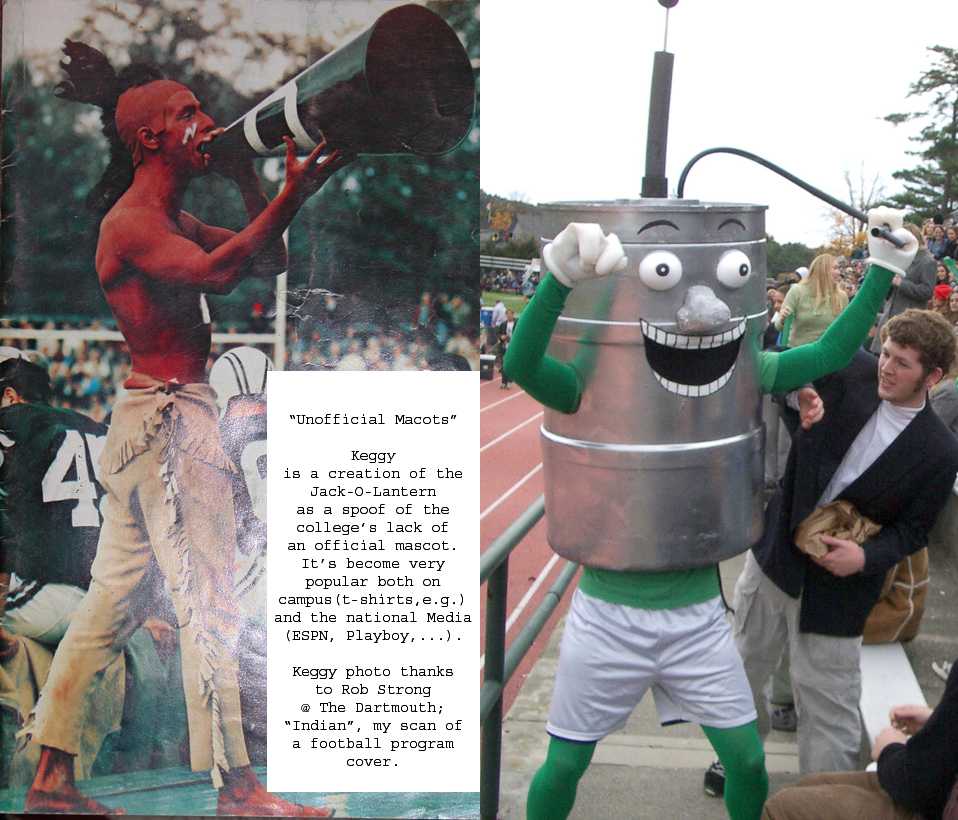 My response to Linsalata

A mascot controversy is raging at New Hampshire's Dartmouth College. It began when athletic director Josie Harper apologized for inviting the University of North Dakota's "Fighting Sioux" for a hockey tournament. Predictably, conservatives on and off campus cried foul, claiming Harper was bowing to "political correctness." Just as predictably, their liberal counterparts staged protests denouncing racism and demanding justice for Indians.

But the controversy predates Harper's apology. Dartmouth's nickname until the 1970s was "the Indians." Though the college abandoned its Native imagery, the Dartmouth Indian lives on unofficially at school functions and on school products.

The latest contretemps flared when the Native American Council placed an advertisement denouncing a long list of arguably anti-Indian incidents. In response, Daniel F. Linsalata wrote an editorial for the conservative Dartmouth Review ridiculing the protesters and their ad. "The events of the past term have demonstrated that the NADs [Native Americans at Dartmouth] have sunk to the level of race-baiting frauds," he claimed.

"The offending advertisement merits both explanation and analysis," he continued. "However, because the NADs failed to reply to requests for an interview on this matter, my own analysis must suffice." Herein is the analysis Linsalata requested.

Linsalata begins with Dartmouth Indian t-shirts being given away by his Dartmouth Review. These feature a stern-looking Indian with warpaint and a mohawk. The organization sells t-shirts, cups, and other items with this symbol on its website.

Depicting a warlike Indian to represent all Indians is obviously stereotypical. If it isn't obvious to Linsalata, what would he say to a "Blacks" t-shirt featuring a Zulu warrior? In fact, the very existence of a product objectifying Indians but not members of other races is arguably racist.

Similarly, Linsalata defends the wooden "Indian-head" canes his organization sells. Presumably he thinks all wooden Indians are okay. The message is that Indians are as stoic as statues.

Similarly, blacks have rhythm. Jews are greedy. Asians are smart. Nothing racist or stereotypical about these assertions, right?

The ethnic equivalent of a wooden cigar-store Indian is a black lawn jockey. Why don't you see such lawn ornaments anymore? Because their racist nature is obvious to everyone—except, perhaps, to Linsalata. 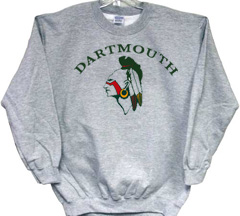 
Linsalata puts great stock in the following definition of "racism" from Merriam-Webster:

If there's no claim of superiority, he suggests, no harmful intent, an Indian nickname or logo can't be racist. But this is an extreme definition of racism. Most people acknowledge that people can be racist unconsciously, without any negative intent.

A better definition is this one from the American Heritage Dictionary:

By this definition, items that feature Indians but not members of other races are racist. Why? Because they discriminate on the basis of race. Indians and only Indian are singled out for stereotyping and objectification.

Linsalata also defends a fraternity t-shirt showing a Holy Cross "Crusader" performing a sex act on a Dartmouth "Indian." This is supposed to be an anti-Holy Cross message, but again we see the Dartmouth approach. One stereotypical Indian represents all Indians. An Indian is singled out for attention. We'd denounce this if it happened to anyone else—e.g., a black man or a white woman.

Linsalata can kid himself that the Indian symbolizes only Dartmouth, not all Indians. But how can he possibly assert that the universe of potential viewers will "read" the image the same way he does? Answer: He can't. He's projecting what he thinks the Indian represents onto what others will think it represents.

Another sore spot for Linsalata is the protesters' antipathy toward the Humphries murals in Dartmouth's Hovey Grill. These paintings commemorate a "humorous" song about Eleazar Wheelock's founding of the college. The song lyrics end with this stanza:

Linsalata offers no defense of the murals, which aver that Indians had no interest in anything except drinking. But he claims the protests are insincere because people are objecting only now.

If this is the best he can do, he might as well give it up. Most people are probably learning about the murals for the first time. Even those who have attended Dartmouth may know little or nothing about them. It's not at all unreasonable that people have begun protesting after the Council's ad brought the murals to their attention. 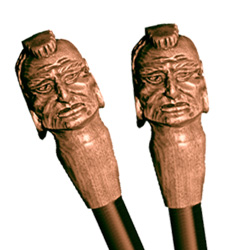 Next, Linsalata takes issue with objections to the crew team's "Cowboys and Indians" formal. "The logic used in decrying the formal can easily be extended to children playing 'Cowboys and Indians' or dressing up as Indians for Halloween, Western movies, and, perhaps, destroying every image of an American Indian that has ever been produced," he writes.

Well, yes, the vast majority of depictions of American Indians have been stereotypical. Linsalata seems to want to deny this, but it's a fact. Should Indians not speak up because people like Linsalata think pernicious images are respectable, even "cool"?

No one's arguing for destroying old images, but they are arguing for eliminating new images such as those the formal propagated. Why is that, exactly? Because the "cowboys and Indians" metaphor plainly treats Indians as outsiders—the "other." They're the bad guys in the scenario. Cowboys are the good guys—the ones who supposedly brought peace and order and civilization to the "Wild West."

Does Linsalata seriously think pitting "civilized" cowboys against "uncivilized" Indians isn't a negative, race-based message? That Indians should tolerate if not accept and embrace it? Talk about race-baiting. This theme is America's original race-baiting myth.

Finally, Linsalata notes that some "drunken fraternity pledges" disrupted an Indian drumming circle. He implies the frat boys would've attacked performers of any race or creed, so we can't label them racist. Maybe so, but it's nothing to excuse. Given the school's historic hostility toward Indians, it's quite possible the boys did target the drummers because of their race.

Dartmouth is where a human mascot used to paint himself bright red to "resemble" an Indian. Where the Dartmouth Review still sells t-shirts plastered with the nonsensical phrase "Wah Hoo Wah." Where Linsalata chose a cover equating legitimate Native protests with a 19th century "primitive" waving a bloody scalp.

Is this how Dartmouth honors and respects Native people—by treating their complex languages like animal calls? By asserting that they're still savages at heart? Indians have every reason to protest the ongoing stereotyping on campus—the race-based discrimination that applies only to them.

More on the Dartmouth Review cover