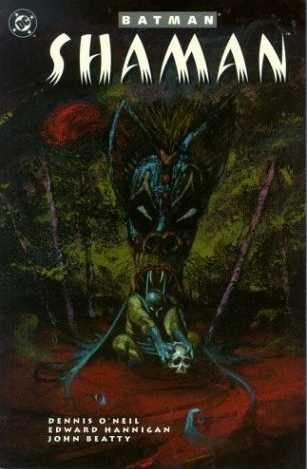 Just read BATMAN: SHAMAN, the first story arc in the comic LEGENDS OF THE DARK KNIGHT, which debuted in 1989. A reviewer on Amazon.com summarizes the storyline:

As a young Bruce Wayne that is not yet Batman tracks a killer in Alaska, he is nearly killed himself. Brought back to life by an Alaskan Shaman with a story of the Bat, Bruce is saved. He returns to his native Gotham to find the town plagued by a mysterious serial killer, taking lives in the name of Chubala, a religion of the Caribbean.

To complicate things further, a museum is broken into a several relics of the tribe that saved Bruce Wayne are stolen. People linked with the tribe are dying, being murdered by some mysterious foe that wears the mask of the bat.

A newly created Batman must learn what the Legend of the Bat from Alaska has to do with an African religion and a glut of murder and drugs in Gotham.For a more detailed review, see The Comics Get Serious.

From the Native perspective, this story has a lot of problems. These include:

While it's possible that one anthropologist could corrupt a formerly pristine village in 1980, it's doubtful. Most Alaskan villages probably adopted the white man's ways in the mid-20th century, after WW II. And they were probably influenced more by the military and the oil companies than by lone anthropologists.

Ignore for a moment that the storyline juxtaposes the two "primitive" religions. That it repeatedly asserts that they're linked somehow. That it calls both religious practitioners "shamans" as if they're equivalent. That the Chubalan shaman, with his painted face and skull, doesn't look much different from a tribal priest.

The storyline links the two religions explicitly through the Bat story. Vulture, the castoff from the Alaskan mythology, goes on to found a religion based on human sacrifice. While this isn't quite the same as saying Natives condoned such sacrifices, it isn't entirely different, either.

In summary, I'd say BATMAN: SHAMAN is a standard Batman story. The Native aspects, especially the idea that the Natives influenced Wayne to "become the Bat," are mildly interesting. But the story is badly flawed in terms of Native cultures. Native youths, schools, and libraries probably should give it a pass.