More Thoughts on Writers (and Artists) 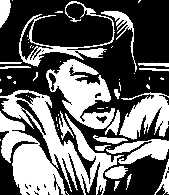 Continuing the process begun in Writers' Guidelines...some ruminations for a Native writer who inquired:

Although I have dozens of possible storylines, a storyline isn't a finished story. In some cases, my storylines are no more than a sentence or three outlining a premise. That obviously leaves much to do.

The further I go from the areas I've studied—the American Southwest, basically—the less confident I am. Many of our stories will take place in the Southwest, but some will range far afield. The more I undertake unfamiliar subjects, the happier I am to have others' help. At some point, having someone write the story for me becomes more effective than my doing the research to "get it right" myself.

I emphasize "the right people" because few people are probably right for the job. For starters, not many people have written comic book scripts before. Being a writer, even a great writer, is only general preparation for doing comics. Comics are not something everyone will do well.

If we move away from comics and do more traditional stories, this point becomes less relevant. But still, not everyone will be able to write suitable action/adventure stories. Some writers may be too sophisticated for the job; others may not be sophisticated enough.

Also, most of our stories will necessarily revolve around our extended family of characters. That means the writer—even the world's greatest writer—must be able to "get into my head" and share my vision for the series. While we may launch new characters or go in unexpected directions, the overall series has to stay focused.

All this suggests the writing process has to be collaborative—people working closely with me—which raises the issue of professional and personal working styles. That's a prime reason I've placed the writer/artist notice online, though we may be a year or two from publishing new stories. By the time I learn if someone can write action/adventure scripts or stories, can write pieces that fit the Blue Corn Comics mold, and can work well with me, a year or two may pass.

As for the pay, I can pay something, but not a whole lot. We might be able to augment the pay with royalties or payments in copies. I'd have to be pretty sure the writers could do the job; I can't afford to pay them to experiment.

Anyway, I'm committed to making PEACE PARTY a success, even if it takes years. As an Internet search will show, I'm doing more marketing than most publishers in my position. Success may be a long-term prospect, but I expect it to happen eventually. Those who join the team will ultimately reap the rewards.

Any questions? Feel free to ask. There are no mysteries here, only incomplete statements of intent. <g>

P.S. Much of the above applies to artists, too.