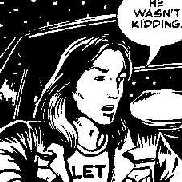 Item:  The LA Times says the movie Being John Malkovich makes other unorthodox movies such as The Blair Witch Project look almost mainstream. Yet the movie has done solid business amid mostly glowing reviews. If the film, which cost $10 million, can gross $15 to $20 million domestically (as expected), it probably will be quite profitable. If it's nominated for Golden Globes or Oscars, it will do even better.

Comment:  Without high-powered hype or glitz, a serious-minded movie is reaching its niche audience. Why? Because there's a market for quality. Targeting that market is one way to reap big bucks (a 100% profit, if the numbers are roughly accurate).

For those wondering about The Iron Giant, it had one key problem: It wasn't a Disney movie. Moreover, it wasn't marketed well. But slap a Disney label on it and I bet it would've done as well as Tarzan.

Item:  American Hollow, an HBO documentary, explains the complex ties that bind an Appalachian family to a cycle of deprivation. In other words, why they don't leave their isolated Kentucky home even though they're mired in poverty.

Comment:  The reason is because people want to stay where they know how "things work"...where they feel safe and comfortable...where they belong. Even if living conditions aren't good. That also explains why many Indians stay on reservations and blacks stay in inner cities though they could leave. It's not a racial thing, as the white hillbilly family proves.

Item:  The LA County Museum of Art is having an exhibit on the Roman city of Pompeii. At a booth where kids can make medallions out of a supple metal, the museum gives them Pokémon, the Lion King, and other popular characters to imprint. It doesn't give them, say, authentic Roman figures the children could learn from.

Comment:  This is good consumer marketing, if poor education. It shows what I've said many times: that cartoon characters are a major "currency" among our kids. Movies, music, and video games may be a stronger short-term influence, but pop icons stay with one forever.

People in my generation grew up with Superman, Captain Kirk, Space Ghost, Archie, and the Flintstones. We can sing the theme songs to Gilligan's Island and Batman. This generation will be a Power Rangers and Pokémon generation as long as it lives. When these kids have their own grandchildren, they'll say, "When I was your age, I collected Pokémon." It'll be a subtle but lasting influence throughout their lives.

So cartoons and comic books are a key battlefield for the hearts and minds of our children...as I wrote in a grant proposal years ago. A comic book is one good way to "get them" while they're young.

Comment:  Minority groups—at least the many sincere ones—aren't protesting to get publicity for themselves. If their goal was political correctness, they'd target only the biggest, white-owned media companies and not a small, black-owned one. Why cannibalize one of their own when they could be scoring major points against Time-Warner, Disney, or whoever? It makes sense only if their grievances are genuine.

Item:  A London artist has produced a display that consists of a double mattress heaped with stained and disheveled sheets, surrounded by the debris of indulgence—discarded stockings, empty vodka bottles, cigarette butts, a used condom, and menstrual-stained underwear. The work is called "My Bed." When one housewife saw it, she rushed the bed with a bottle of disinfectant to mop up what she considered filth. "It was my duty to clean up the mess," she later told the Daily Mail.

Comment:  I'd say "only in America," but this time I'll amend it to "only in Western civilization...."

Related links
A shining city on a hill:  what Americans believe