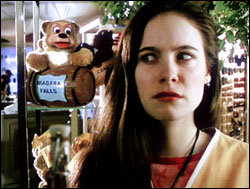 A followup to my Indian Comics Irregular essay The Wonder of Wonderfalls:

The first episode of the late, lamented Wonderfalls hinted at a Native American connection, but the unaired 12th episode, "Totem Mole," made it almost clear. A summary:

"Totem Mole" was one of the few times Indians didn't appear in a stereotypical story: a murder connected to a casino, mystical forces in a burial ground. Native people were central to the story, not peripheral.

Additional comments from viewers
From Television Without Pity:

More on Indians and Niagara Falls
"Maid of the Mist" comic
Senecas to run tour boats?