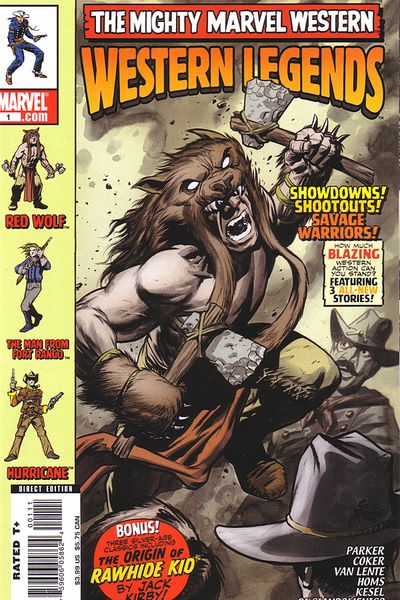 Got a new comic called MIGHTY MARVEL WESTERNS:  WESTERN LEGENDS this week. It's a one-shot with three all-new tales of the Mighty Marvel West featuring Indians.

The stories all have good artwork, but the writing is a mixed bag. Here's how the lineup fared (with summaries courtesy of Marvel's marketing info):

This story is notable because an Apache girl accompanying Hurricane narrates it. She has a normal range of thoughts and feelings—i.e., she isn't stereotypical. The artwork by Tomm Coker is attractive.Red Wolf is your classic tomahawk-wielding warrior. If he weren't the first Marvel hero of this type, I'd say he was stereotypical. The story is interesting only because it shows how the mantle of Red Wolf gets passed from one Indian to another.This mishmash of a story shows what happens when you use Native lore without knowing what you're talking about. Saber is trying to round up some stray Acoma Indians (a real tribe in New Mexico). But the Acoma are led by the wily Cap'n Jack (a real subchief of the Modoc in California).

At first I thought writer Fred Van Lente had merely misappropriated Captain Jack's name. But talk of volcanic caves and lava tubes seems to indicate the story is occurring in Modoc territory. Apparently Van Lente thought it was okay to place a New Mexico tribe in a Northern California setting for the sake of storytelling.

But it gets worse. The actual setting is identified as Lost Mesa, a place that sounds as if it belongs in the Southwest. The disputants are attacked by a catlike man-beast named Heart-Like-Fire. Heart-Like-Fire appears to be an ancestor of Puma (Thomas Fireheart), a Marvel anti-hero of Native American descent.

Heart-Like-Fire says he's protecting Lost Mesa, home of the fictional Kisani tribe. Puma's tribe has never been named—probably to avoid an embarrassing mistake—but it supposedly resides in Arizona. So where does that leave us?

The Acoma Indians of New Mexico, led by Cap'n Jack of the Modoc, are hiding in volcanic Northern California on Lost Mesa in the Southwest, which is inhabited by the Kisani ancestors of Puma the anti-hero of Arizona. All clear?

An extra demerit for the cover, which shows a ferocious Red Wolf next to the caption "Savage Warriors!" The linkage isn't explicit, but the implication is clear. It's usually the Indians, not the cowboys, who get labeled as savages.