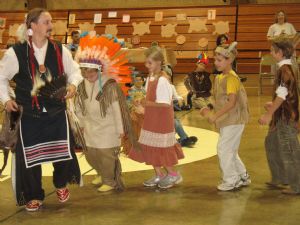 From the Williamsport Sun-Gazette:

Rob's comment
The "feast" includes food from around Indian country, but everything else suggests Forsythe is teaching his students that Plains Indians = Indians. The evidence for this includes the teepee, the faux "chief" shown in the picture, the "Sioux warrior," and the painted pony. Equating Indians with Plains Indians is one of the most common stereotypes.