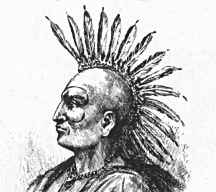 Rob's reply
The NCAA's corporate partners are debasing Indians by selling products named after them? I don't think so.

In response to his editorial, I sent Daniels the following:

If I read your column write, you think the NCAA is debasing Indians with its corporate partners and products named after them. Not so.

The NCAA understands the problem of Indian mascots, but I'm not sure about you. You talk about the NCAA's partners who sell Pontiac cars, Chippewa Water, and Calumet Baking Powder. But Indians have rarely if ever protested their names used on hundreds of thousands of commercial products.

Cars, water, and baking powder don't qualify. Neither do state and other place names, another irrelevant point made by pro-mascot columnists. With their emphasis on warring and winning, sports teams do qualify. They're by far the most prominent example of a prejudicial Indian stereotype.

Many columnists scratched their head and wondered how the NCAA could criticize the mere use of Indian names such as "Seminole" and "Illini." That misreads the NCAA's conclusion. The NCAA didn't say such terms are offensive; it said the names, logos, and (most important) mascots create a hostile and abusive environment.

How so? Well, "Seminoles" creates a hostile environment when a warrior on horseback throwing a flaming spear encourages fans to think of Native people as savage, bloodthirsty killers. See Why FSU's Seminoles Aren't Okay for more on this point.

Most Indians weren't killers or even warriors. They definitely weren't spearchuckers a la the phony "Chief Osceola." So the warrior image is a stereotype and a false one at that. Opposing it isn't politically correct, it's historically and morally correct. It's correct, period.