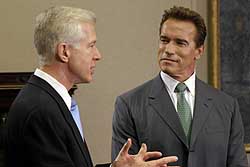 Rob's reply
>> "You guys are going to have casinos everywhere," he said <<

An obvious scaremongering tactic, implying the land-into-trust process is out of control. Actually, the process is well under control; I'm not sure a single off-reservation casino exists in California yet.

The governor has the power to veto any off-reservation deal, so the issue is up to Schwarzenegger. Since Californians voted for him in droves, his decision presumably will reflect the popular will. If they don't like his decision, they can vote for another candidate.

>> The guy who negotiated that for Gray Davis was a lunkhead. The California Compact gave away the store. <<

See One Reason Why Arnold Won:  His Attack Ads Involving Indian Gaming, and Their Larger Context and Significance for what actually happened.

These comments imply the gaming Indians are crafty, stealthy, sneaking up to rob our homes and steal our children. That's why these new stereotypes are a variation of the old stereotypes, such as the savage Indian.

More scaremongering. Some tribes make deals with "gambling operations"—i.e., well-respected corporations in the gambling business—because they lack the necessary expertise to start a casino on their own. That makes them a partner, not a "front."

>> the Hesperia casino interests have hired a former head of the Bureau of Indian Affairs. <<

Fromson means Kevin Gover. I don't know if Gover is "high-powered," but he's an Indian and an expert on sovereignty issues and the federal recognition process. Whom else should the tribe hire to do their legal work: Johnnie Cochran?

>> He also called casinos "a hidden tax primarily paid by the working class," <<

A "hidden tax" people pay voluntarily, which makes it no different than any other business transaction and not a tax.

If a casino "taxes" a local community, it also helps it by creating jobs and businesses. The net effect is uncertain—studies offer conflicting evidence—but it's arguably better and probably no worse than any business that size.

>> "This isn't about Indians," he said to the anti-gaming audience. <<

Isn't it? Has Fromson spoken up about the wide-ranging problems caused by selfish business interests: Enron and WorldCom, Halliburton and Bechtel, Wal-Mart and McDonald's? Because these corporate giants have a much greater impact on American lives than Indian casinos do.

I'm guessing he hasn't. Until Fromson puts tribal gaming's few problems into perspective, I'd say his attacks are about Indians.