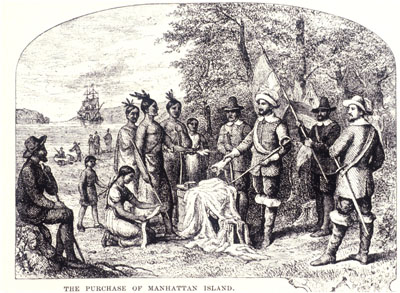 From the Louisiana Weekly:

>> Louisiana sold to Indians for a string of beads <<

That Indians sold their land and other possessions for beads is a stereotype. It implies the Indians were stupid rather than shrewd negotiators.

With this article title, Tidmore is saying today's Louisianans are as foolish as yesterday's Indians. Since he thinks his fellow Louisianans are making a big mistake, he's indicting the intelligence of Indians also.

Actually, the whole story of the Indians selling Manhattan to Peter Minuit for beads worth $24, from whence this stereotype came, may be false. According to one source, the Indians doing the selling didn't own the rights to the land. It's possible they cleverly swindled Minuit and got his trinkets for nothing.

>> The ruling effectively allows any Native American group to build a casino on virtually any given piece of property. <<

This is a ridiculous overstatement of the facts. A tribe can take land into trust only if the land is in its historic range. A Native group like California's Chumash can't build a casino outside Southern California any more than the KKK or the Boy Scouts can.

>> Under Federal Law, Indian "reservations," both the real and imagined sort, exist outside the regulatory or taxable authority of the states. <<

Needless to say, there are no such things as "imagined" reservations.

Indians aren't claiming they've found reservations that only they can perceive. They're taking land into trust, a different process than establishing a reservation. The land-into-trust process exists because white people stole millions of square miles of land from the Indians. This lets them retrieve a small portion of the land that was originally theirs.

>> Given that the casino would likely have a deleterious effect on the local economy and would provide a net loss in tax revenue, of course, Mike Foster is in favor of the casino. <<

If the Jena Choctaws' casino had a deleterious effect on the economy, it would be one of the few Indian casinos that did. Most reports show Indian casinos having a markedly positive effect on local economies. They may cause quality-of-life problems, but the economic benefits are

>> In other words, Martin is attempting to lay the proverbial groundwork by stating that the casino would pose no economic liability. >>

In other words, the casino actually wouldn't pose any economic liability, according to the best evidence available, and Tidmore can't accept the facts.

And rightly so, since states can't tax tribal casinos. Martin is properly standing up for the concept of tribal sovereignty.

>> In this case, though, Gov. Foster has not even worried that Indian gambling is totally unregulated. The so-called "reform" governor has expressed not one word of concern that tribal casinos are self-regulated without any state controls. <<

>> Has the good governor expressed worry that without these statutory and regulatory safeguards, the integrity of Indian gambling operations can be severely compromised — and the state doesn't have any recourse? <<

The integrity of Indian gambling operations hasn't been compromised yet, so the existing regulatory scheme must be doing its job.

Maybe Foster didn't express open concern because he was quietly negotiating the issue. Really, this whole article is overblown.

>> Has any member of the governor's staff questioned who are the primary financial beneficiaries of the proposed DeSoto Casino? Is it the Indian tribe or are the Jena Band just a front for gambling interests seeking to operate unregulated casinos tax-free? <<

The Indian Gaming Regulatory Act mandates that tribes be the primary beneficiaries of the casinos they run. Tribes don't bring in outside partners because they're foolish—giving away their business like the Indians gave away Manhattan. They bring partners in because they need help with the complex and expensive job of launching a multimillion-dollar enterprise.

Despite Tidmore's scare tactics, Gov. Foster didn't "give away the store" or even sign a compact. He didn't confirm himself as the Choctaws' best friend or reap any benefit from the negotiations. So another example of Indians who are too powerful, who can buy whatever they want, bites the dust.

The land-into-trust process continues to work as it should. If the governor, who represents the people of the state, doesn't think a casino is a good idea, he or she can turn it down. That seems to be what incoming Gov. Blanco will do.