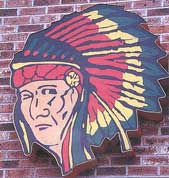 See what a real Cherokee looks like! Soon to be as well-known as McDonald's!