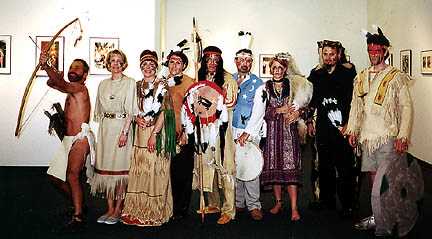 Bourgeois and the Huffmans exchange views

Rob's comment
To me the crux of the matter is this:

Even if the dress is authentic, can students authentically talk, sing, and play music in a foreign culture after a lesson or two? Do they go through the same fasting and purification rituals as someone doing a real ceremony? Do they understand the difference between doing a ceremony in a classroom and doing it in a natural setting, with a people's survival depending on it? Do they understand the entire sweep of the culture that led to this particular ceremony?

Moreover, as the Huffmans suggest, has Bourgeois rigorously kept all knowledge that's supposed to be secret, secret? Has he kept the roles strictly segregated by sex: men in male roles and women in female roles? All very doubtful, I'd guess.

The upshot is that students may think they've got a sense of the culture, but they probably haven't. They may have a sense of what one ceremony looks and sounds like, but that's a far cry from understanding the underlying mythology and lore. To assume the superficial trappings of one ceremony is akin to the culture itself is stereotypical thinking.

As the Huffmans say, one could imitate a Christian ceremony also—say, a High Mass. I wouldn't necessarily say this imitation would mock Christian spirituality. What I would say is that the imitation would give you only a vague glimpse into the Christian culture, not "truly a real sense." You wouldn't get a real sense until you immersed yourself in the culture for years.

The same applies to anyone who imitates an indigenous ceremony: wannabes, Y-Indian Guides, dance or ice-skating shows, etc. I'd say it's better to study the ceremony from without than to try to imitate it from within. That way, you won't delude yourself into thinking that simply aping a ceremony provides deep insight into a complex culture.