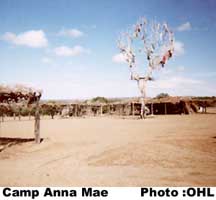 Another Stereotype of the Month entry and response to Hopis vs. Big Mountain Trespassers:

Rob's comment
The stereotype here is Looking Horse's claim that Indians who disagree with him—who don't support the Navajo occupation of Hopi land—have a "disease of the mind." They're sick in the head, in other words. That makes their thoughts and beliefs wrongheaded and "non-Indian."

Looking Horse apparently believes the Hopi who aren't "traditional" enough, who may have disrupted the ceremony for good reason, somehow forfeit their Indian label. Wrong. Indian aren't Indians simply because of what they believe. If that were true, I could change my beliefs and become an Indian too.

No, the Hopi and other Indians are Indians no matter what they think or say. If they abandon their traditions completely and join the Native American Church, the Mormon Church, or the Hare Krishnas, they're still Indians. The only sickness I see is Looking Horse's insulting claim that anyone who disagrees with him is less honorable than he is.

Some additional facts from the Navajo-Hopi Observer, 7/24/01: