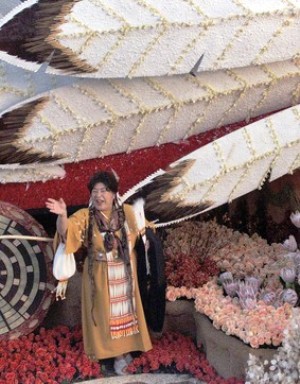 In the 2001 Rose Parade, Countrywide Home Loans entered a "First Americans" float to fulfill the "Fabric of America" theme. It featured a giant chief's feather bonnet accompanied by a woman in a buckskin dress waving at the crowds. This float won the parade's National Award, given to "the best depiction of life in the United States, past, present, or future.

There's nothing horrendous about either of the float's images, but they're common stereotypes of Native people. They don't reflect Native life as it is today. They really don't reflect the "first Americans" either, since the Plains Indians moved to their region and developed their feather bonnets relatively recently.

A real "first Americans" float might show an Inuit snowhouse, an Olmec head, an Cahokia-style mound, an "Anasazi" cliff dwelling, the lines carved at Nazca, etc. Don't expect to see anything like that informative in a parade any time soon.