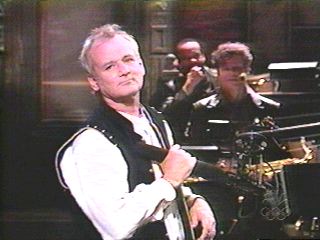 Last November and again this May, NBC broadcast Saturday Night Live's 25th anniversary special. Besides its many memorable moments, the show was notable for opening with a Native-themed skit. Since it covered similar ground to Howard Stern's recent Son of the Beach episode, a comparison may be instructive.

SNL's skit was set in the "Omagolli" Indian casino somewhere near New York City. I cringed when I realized Bill Murray was going to do his usual insensitive lounge-singer act. Given SNL's track record, I doubted it would be flattering to Native Americans.

Indeed, the first cultural comment was unflattering. Murray's character supposedly changed his name from Nick Ansara to Nick "Thinblood," according to Murray, "when I found I was 1/256th Omagolli, which cuts me in on the friends and family profit-sharing, which we're all crazy about."

An unflattering comment but a valid one, with some truth to it. Some people are declaring themselves long-lost Indians so they can claim part of a tribe's annual income distribution.

As I settled in to watch the skit (and rewatch it on tape), I realized it was a more honest portrayal than Howard Stern's travesty of Indian life. Here are some differences:

SNL has a 25-year history of spoofing things, so one Indian skit in this context isn't remarkable. In contrast, Stern spoofed Indians in the fourth of his six Beach episodes. Clearly, he felt Indians were more deserving of spoofing than SNL did.

SNL's made-up "Omagolli" (spelling?) name was arguably neutral, while Stern's "Kahonees" was an insult (look up cajones in a colloquial Spanish/English dictionary). Remember, this is the name the tribe supposedly calls itself. Would anyone show Chinese people calling their country Chink-land or French people calling theirs The Republic of Frogs?

Stern threw together stereotypes from across America (e.g., a Woodland Indian tomahawk, a Plains Indian tipi) and situated them in coastal California. SNL's skit conveyed culturally valid information about Indians in general and New York's Indians in particular. For example:

In short, Stern mixed stereotypes into a casino story so he could make fun of Indians while making a facile point. In contrast, SNL used its casino story not only to entertain, but to enlighten. It presented both flattering and unflattering—but honest—thoughts about Indians. That's all anyone can ask.