A retailer speaks
Some thoughts on publishing from comic-book retailer Steve Bates: 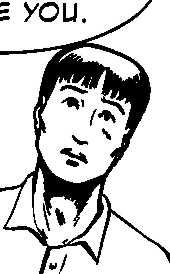 Rob's reply
Thanks for the input.

I love comics too, but I loved them just as much when they were 12, 15, 20, or 25 cents. I don't think the quality has improved enough to justify the price increases. Sure, the stories and art are usually better, but are they 10 or 20 times better? I don't think so.

Superheroes may be tapped out, but I think there's room for a new twist on the genre. I'm thinking less of spandex and world conquerors the further I go. I have an advantage over someone like Don McGregor, whose DETECTIVES INC. has to compete with thousands of intelligent detective stories. Not many creators have tapped into the growing interest in multicultural subjects (and no, making the sidekick or teammate black doesn't count).

I'll probably try to finish the first PEACE PARTY story arc as a graphic novel. But I don't know about color. Doesn't that double the production price? Is the lack of color a significant obstacle for books such as the CONCRETE TPBs?

I'll definitely hit the major booksellers if I have a TPB to promote. I haven't bothered with them yet because I don't think many carry comic books, especially independent titles. Regular books are a different matter.

Toy and CD deals in advance? Hmm. I'll be lucky to get the TPB out to all the book reviewers who should review it. <g> It's definitely a drawback to do this all myself without a collaborator, friend, or spouse to rely on, but I'll try to work some deals.

I can do something about the Internet support—character bios, "making of" stuff, and so forth. I have all that material and will post it eventually. Week by week my site is expanding, and I try to give people reasons to visit it.

I'm committed to publishing PEACE PARTY. Eventually I'll have more resources to devote to it. The question is whether I'll manage to do two or three measly story arcs, like most creators, or whether I can turn it into a cottage industry, like Dave Sim with CEREBUS or the Pinis with ELFQUEST.

Publishing Indian comics (1/26/05)
While I sought the advice of people such as retailer Steve Bates, people now seek my advice on publishing Indian comics. Here's what I told one fellow who wants to do a comic about "a Kiowa-Apache who is enslaved by Spanish conquistadors in the mid-1500s":

>> We are looking for a comic publisher to pick up this book (and the series). We are also considering grants to self-publish this work. Can you give us any insight or direction in those directions? <<

It'll also be hard to find grants for self-publishing if you're a group of individuals working as a for-profit business. States and cities sometimes offer arts grants, but they're usually for museums or artists who can put on public shows. If you were a nonprofit yourself, or could hook up with a nonprofit—a historical or western society?—you might be able to get a grant that way.

I wouldn't count on getting funding from a gaming tribe, either. Everyone thinks of that and I'm sure tribes are inundated with thousands of proposals. After developing contacts in Indian country for almost 15 years, I'm still working on that angle.

I don't know if you know it, but Indians and comics are hugely popular in Europe, especially Germany. It's possible a German publisher might consider publishing an Indian comic that an American publisher wouldn't. This is something I'm going to look into myself.

I'd also consider self-publishing it yourself if I were you. That's probably what I'll do with the next edition of PEACE PARTY. You may have to max out your credit cards or get a second mortgage on your house, but no sacrifice is too great for your comic, right? <g>

I'd strongly urge you to try selling everywhere besides comic-book shops. The typical comics reader isn't going to be interested in your materials. But schools, libraries, museums, bookstores, gift shops, trading posts, and powwows might be. And think about trying to sell your comic overseas, although I haven't done that yet.

I hope to publish other people's work myself someday, but I'm a long way from that. I'm having trouble even getting artists to dedicate themselves to my work. If you have artists whom you don't have to pay, you have a leg up on me. I may go to mostly prose stories to make up for this problem.

See the PEACE PARTY postings in the Author's Forum for more of my thoughts on doing Indian comics. Good luck!