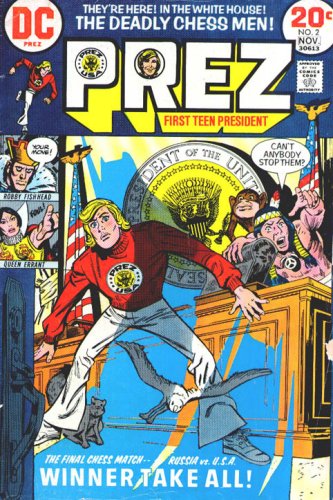 One comic I never read from the 1970s was PREZ, about the first teenage president. A correspondent recently brought it to my attention:

No. I didn't get PREZ when it came out, and it lasted only four issues. All I know about Prez comes from the SANDMAN issue he appeared in.There's no mention of Eagle Free on the site. Incidentally, there's no search function because most search serives charge you after 500 pages or require you to incorporate ads into their routine.

and make sure to click on Eagle Free's name for a stereotype-laden panel.Pretty bad! Did you check the other images at the bottom? Most of them feature Eagle Free.

If he's not somewhere in the "Blue Corn Comics", I think he should be for completeness' sake.According to the "Gone and Forgotten" site, Prez Rickard's campaign took off with Eagle Free's help:

Once Prez got elected, the fun continued:Another website notes how Eagle Free operated:Judging by the posted images, Eagle Free was badly stereotypical. I'd say people didn't know any better then, but comics had already given us Wyatt Wingfoot and Red Wolf at Marvel and Firehair at DC. There's no excuse for characters this ridiculous, then or now.

"Anonymous" replies
Another correspondent offered some thoughts on Eagle Free and the following exchange ensued:

One panel compares Eagle Free to different animals. It even says he has the strength of a "primate ape," an animal not native to America. Hello? Haven't we learned by now that comparing humans to apes is insulting?

The whole idea of Natives being in tune with Nature is somewhat stereotypical. Even if there's an explanation, even if it's unique to Eagle Free, it doesn't change the point.

Eagle Free dresses in literally the most stereotypical fashion: buckskin pants, bare chest, single feather stuck in a headband. He lives in a tepee, another egregious stereotype. As head of the FBI, it must be tough phoning agents, writing memos, or going to the bathroom out on the lawn. But hey, Eagle Free can't help it. He's natural!

I can't prove it, but I suspect readers are more likely to pick up the negative traits than the positive ones. A half-naked Indian who acts like a savage and consorts with animals is a picture that reinforces 500 years of stereotyping. An Indian who speaks normally and heads the FBI is a rare occurrence that fades quickly from the mind. (The correspondent who brought Eagle Free to my attention didn't even remember him.)

So which traits are most likely to stick with the typical reader? Experience suggests the negative ones will dominate his mental image of Indians.

Having real Indians show up and put the lie to the stereotypes might work. After all, PREZ was contemporary with Wounded Knee II. What would Dennis Banks or Russell Means have said if they met Eagle Free?

But alas, this approach doesn't register with people in reality. How often have protesters pointed out that they don't look like Chief Wahoo or Chief Illiniwek? It doesn't seem to make any difference.