An expanded version of my Indian Comics Irregular essay Natives Sing It Their Way:

Ron Fattoruso, PEACE PARTY #1's penciler, suggested we look at songs about Native Americans. Since we aim to cover Native appearances in popular culture, the topic is a good one. How do Indians fare in pop music?

Ron submitted three Native-themed songs by heavy metal groups. One of the groups (Testament) has a Native American lead singer. Here are the lyrics:

Rob's analysis
What can we note about these songs?

On the plus side, they summarize key moments of Native history with reasonable accuracy. They make good use of Indian names, concepts, and events. One can't expect much more in a short slice of music.

And yet, they're still subtly stereotypical. They present and reinforce only one side of the story. Let's see how.

The overwhelming tone of these songs is elegiac. The Indians were strong, brave, and unyielding. They fought against overwhelming forces until, to coin a phrase, they could fight no more (forever). But still they lost.

The imagery reinforces this tone. The setting sun, the trail of tears, running for the hills, fighting to the grave. The message is that Indians are defeated, dead, and gone.

While Indians did lose battles, they also won battles or fought the US Army to a draw. They signed some treaties because both sides were tired of the fighting—not because the Indians were beaten. The reality is more complex than the picture these songs paint.

More important, the end of the free-ranging Indian was only the first book of the saga. Native people continued to live. They adopted representative governments and are now increasing in population and prosperity. They don't need to pray for survival or freedom. They're as alive and as free as any other Americans.

A second theme is the Indian as warrior. All these songs contain martial language. "A warrior's riding"..."hatchets sing with pride"..."We fought him hard, we fought him well." Many Indians, especially those who battled the US Army, were obviously warriors. But many weren't. The Pueblo people, for instance, fought not with "hatchets" but with what we'd call civil disobedience today. Often they resisted passively or simply ran away.1

The image of the Indian brave on horseback is a classic one. Although this figure really existed, it's a stereotype. From fur-swaddled Inuit in snowhouses to Maya priests atop pyramids, it doesn't convey the richness and diversity of Native cultures.

"Ghost Dance"
In contrast, here's a song by Robbie Robertson (Mohawk) and the Red Road Ensemble. It covers roughly the same period and events as the other songs: 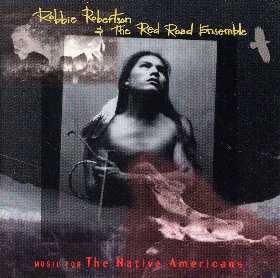 "You don't stand a chance"
The differences?

1) A more knowing account of Native history. Crazy Horse and Sitting Bull as mystics and apostles, not just warriors. An idea that the Indian/Anglo clashes were about ideological differences, not just greed. A more thorough listing of Native people. (Not just the Sioux and Apache fought the US.)

2) No invocation of warrior imagery. In "Ghost Dance," prayer and love will win the day. This reflects the deep spiritual grounding of traditional Native cultures. Though Indian tribes fought with each other, harmony rather than supremacy was their overriding goal.

3) Finally, "Ghost Dance" looks forward rather than backward. This isn't an elegy of a defeated people, but rather a prediction of times to come. The tone is similar to that of the civil rights movement, which was also religiously based: "We shall live again," "We shall overcome." There's no doubt in the word "shall" that the outcome will occur.

More vanishing Indians in song
From the Guardian, 7/6/07:

Readers respond
How accurate was "Spirit Horse of the Cherokee"?