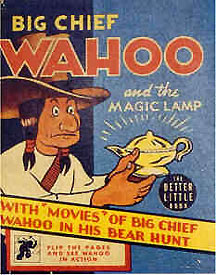 Big Chief Wahoo
The first major Native American comic hero started out in a newspaper strip that was later reprinted in comics like FAMOUS FUNNIES. It wasn't even his strip at first. It was called The Great Gusto and the lead was a W.C. Fields-like con man and snake oil salesman named Gusto. In his first adventure Gusto ran into Big Chief Wahoo. Wahoo had left Tepee Town to meet his fiancee, Minnie Ha-Cha, in New York City. Wahoo was independently wealthy (to the tune of some " ‘Leventeen thousand dollars" in "wampum from oil wells." Wahoo also knew the secret of a wonderful medicine which Gusto named "Ka-Zowie Kure-All." They rode to New York hawking the miracle cure all the way.

Though he was always referred to as Chief Wahoo, he left without making any sort of arrangement for running Tepee Town in his absence, leading one to believe that the writer only called him Chief because he was an Indian. He fit the role of the ignorant savage more than anything. Much of the humor came from Wahoo's ignorance of cars, airplanes, skyscrapers, etc. Still he was usually shrewd enough not to let himself be taken in by greedy folks after his money. He tolerated Gusto's antics more than anything, and could utter an appropriately sarcastic remark. For instance, while escaping from a golddigger who'd used him to buy her a mink coat, he said, "Let squaw keep-um coat! Let's go before she get-um shirt!"

In some ways he used more common sense than the whites around him. You might say he had the traits of all three Marx Brothers: Harpo's innocence, Chico's trouble with language, and Groucho-like zingers on occasion.

With his naive honesty and broad humor, Wahoo had more likeable traits than Gusto and soon took over the strip, which changed its title to Big Chief Wahoo. By 1940, the strip evolved into an adventure series, and Wahoo became the sidekick to reporter Steve Roper. Roper took over the strip comepletely by 1947 until he was replaced by P.I. Mike Nomad in turn.

You couldn't find a better example of the ignorant savage than Wahoo. Besides the language cited above, the way he wrote letters in pictures, and his attempts to ride a car like a horse, Wahoo—unlike other mythic millionaires like Jack Benny or Scrooge McDuck—didn't stow his money in a vault. He carried it everywhere with him in sacks. Apparently he preferred very large bills. 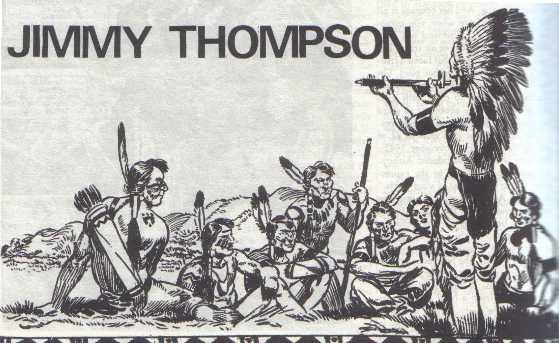 The strip Chief resembled Popeye with his lopsided chin, huge forearms and calves. At least he wore a hat rather than a headdress.

Although the comic character is long gone and hardly remembered, his name still stirs controversy. The name Chief Wahoo for the Cleveland Indians' cartoon mascot, if not the image, was derived from the strip.

Redmen, Red Eagle, and Red Ryder
Jimmy Thompson is best known to Golden Age superhero fans as artist on Timely's 1940's incarnation of The Angel and the Human Torch and DC's original Robotman. Given the opportunity to create and write his own features, he preferred Native Americans.

In the late 1930s he appeared in KING COMICS with an original strip amid reprints of King Features strips like Flash Gordon and Popeye. Redmen was laid out like a Sunday page but was not a reprint. Comics historian Ron Goulart calls his work "the best Indian stories in comic book history" and cites "conflicts among tribes and mixed in Indian magic and folk tales." His hero, the Mohawk Black Hawk, was "a man of skill and intelligence who could speak without sounding like Tonto." ("Forgotten Artists of the Golden Age: Jimmy Thompson," Ron Goulart, Comics The Golden Age Number 2.)

In 1939 he drew Indian Lore for KING's companion title MAGIC COMICS. His magnum opus was Red Eagle in 1938. McKay, who published KING and MAGIC, issued Red Eagle as a full-length Feature Book with 64 pages. This Cherokee hero and his love, Blue Sky, "mixed action, Indian legends, fantasy and romance" in an epic story that sounds more classical than comic book, ending with the deaths of the protagonists and a message of new life. 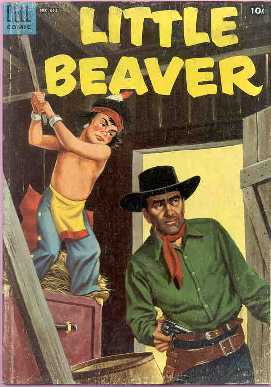 Red Ryder was the hero of a newspaper strip and later a comic book with a Native kid sidekick named Little Beaver. The youngster was as brave and as canny as Robin or Bucky, but he was usually comic relief in the form of the ignorant savage. Like Wahoo, he spoke broken English with a lot of "-ums." His catch-phrase—"you betchum, Red Ryder!"—was well known from the radio and movie series as well as comics. Little Beaver is worth mentioning because Dell eventually gave him his own title. In his book he was more resourceful and self-reliant than he was as Red Ryder's sidekick.

Native Americans turn superhero
With the renaissance in comic books after Superman and Batman, the huge mobs of heroes in original-to-comic-book strips included some of Native origin, some of which are better left forgotten. From token roles as partners or in teams like Black Hawk in Red Coat Patrol, Sagua in the pirate strip Hawk of the Seas, or Eagle in Timely's Tough Kids Squad, they graduated to heroic status of their own.

Lev Gleason's Golden Age DAREDEVIL COMICS #2-11 featured the Bronze Terror aka Real American #1. Terror was a full-blooded Apache (though named Jeff Dixon) who became a prominent lawyer to help his people, but took up the superhero role after his father was framed for murder. The strip was created by Dick Briefer, best known for his FRANKENSTEIN for Prize Comics.

The Bird Man (no relation to Harvey Birdman) appeared in Fox's WEIRD COMICS: "Over the vast wilderness of the great Western canyons swoops the Bird Man, winged hunter of the plains. A descendant of an ancient Indian god, the Bird Man was gifted with the ability to fly and the keen senses of a bird of prey."

One of the more interesting takes on Native Americans came from Canada. TRIUMPH COMICS (1941-1947) featured Nelvana, Canada's best-known comics heroine. Based on Eskimo legends, Nelvana was the daughter of King Koliak, ruler of the Northern Lights. Her main powers were flying at the speed of light and becoming invisible by blending with the Northern Lights. She appeared in print before Wonder Woman and controlled the weather long before Ororo. 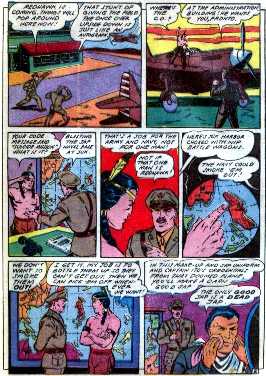 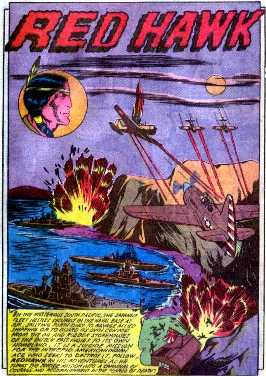 One of the weirdest Native heroes was Red Hawk in BLAZING COMICS. In this aviation strip, Major Red Hawk was a Native fighter pilot well before DC's Johnny Cloud, but the strip was disturbing in several ways. Red Hawk flew his "speedy fighter" wearing a headband with a single feather and buckskin pants, naked to the waist except for armbands. In his splash panel his encircled profile looks like it belongs on a nickel. He wasn't in the Army Air Corps but was a freelancer who liked to volunteer for suicide missions. With only a little makeup and a uniform for disguise he "made a pretty good Jap." Worst of all, he spouted things like "The only good Jap is a dead Jap," seemingly oblivious to whose people that was originally said about. The whole thing ends up reading like "red man killing yellow men for the white man."

Mantoka, Maker of Indian Magic, was a little better. In Centaur's FUNNY PAGES he gained his powers when a shaman induced him to be bitten by the Snake of Knowledge. Mantoka lapsed into a near-death coma but when he recovered he knew the secrets of magic. Presumably his powers, such as turning to vapor or stone, weren't based on actual Indian lore; they seemed more like whatever was needed in the script.

White Indians
Another type of "Indian" hero came into being in the '40s with Timely's Black Marvel and DC's Tomahawk and Green Arrow. These were white men who learned their abilities from Natives but used them mainly to fight crime in white society.

The Black Marvel appeared in Timely (today's Marvel) Comics' MYSTIC COMICS. He was a white man, Dan Lyons, who passed the tests to become the Blackfoot people's traditional champion. Presumably he was the first white to ever take the tests. Since the original, Native Black Marvel had just a black horse and warpaint, it's unknown why the tribe gave Lyons a hooded, skintight pair of black longjohns with yellow boots when he assumed the role.

Tomahawk first appeared in STAR-SPANGLED COMICS #69. Tom Hawk was raised by Indians and used their backwoods skills to fight the British in the Revolutionary War. He later had his own title which ran until 1972. Before his book was canceled, his halfbreed son Hawk replaced him and the stories dealt more with racial tensions. 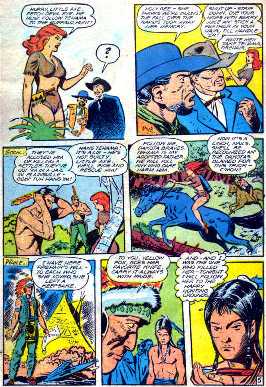 The original origin of the Green Arrow and Speedy (MORE FUN COMICS #73) had millionaire Oliver Queen pursuing Indian artifacts on Lost Mesa where he met Roy Harper and his family's Native servant Quoag. They taught him archery and Queen took Roy as his ward to become the Green Arrow and Speedy. Later retellings had Queen teach himself while marooned on a South Seas island, although Roy's Native upbringing was kept.

The "White Indians" didn't stop with whites who learned from Natives. White men (and one very noticeable woman) raised by Indians as Indians became an arche/stereotype in itself.

The most outstanding example was Firehair from Fiction House, best known for their "good girl art." Firehair was a buxom, leggy redhead raised by Indians. She battled evil on the frontier in RANGERS COMICS and later in her own book. She wore a fringed, tight-fit, low neckline Indian maiden outfit that would have raised white or Native eyebrows. Later she donned a bucksin halter and shorts that probably would have got her locked up for indecency in frontier days.

Others such as Frank Frazetta's WHITE INDIAN for Magazine Enterprises and Atlas's (Timely/Marvel's '50s incarnation) APACHE KID followed in the '50s. White Indians continued into the Silver Age with DC's own, male version of FIREHAIR as well as HAWK SON OF TOMAHAWK and SCALPHUNTER.

The problem with pseudo-Indians
The white Indian trend seems innocuous at first—the white man's fantasy of shedding the trappings of civilization to live a freer, simpler, purer life in the wild. An American version of Tarzan.

In the '50s some very popular comics offered a more positive take on Native Americans. Part 2 of this article will cover them.