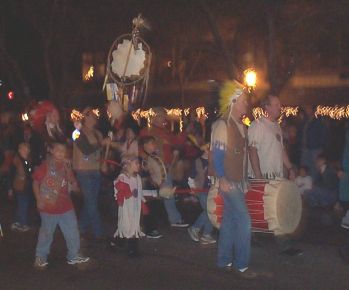 A response to YMCA-Indian Guides:

Thanks for writing. I'd be glad to include your comments...but have you addressed my points any better than Michelle Malkin did?

Malkin noted that Harold Keltner "teamed up with a Canadian Ojibway Indian" to found the Y-Guides. Are you saying the Indian was responsible for the organization's Indian customs and costumes? Do you have any documentation of that? A website with the information, perhaps?

I don't think the role of one or a dozen Indians in the Indian Guides is germane to my criticism. For one thing, non-Indians have dominated the YMCA since its inception. They've had the freedom to change or bastardize any genuine Indian lore.

For another thing, some Indians have been guilty of participating in the bastardization of their own cultures. It's almost a necessity when you're surrounded by and trying to accommodate a more powerful culture. You save what you can by (over)simplifying and parading it for tourists and other outsiders. You end up stereotyping your own people.

For a good example of this, see the Indian tribes who support sports mascots that caricature them as one-dimensional warriors. For instance, the Florida Seminoles: Why FSU's Seminoles Aren't Okay

Even if you remove the Indian part, I don't agree that turning strong, independent girls into Daddy's little princesses is a good idea. Our society inundates girls with the message that they should be pretty Cinderellas, waiting for a man to sweep them off their feet and take care of them. We need less of that kind of relationship building, not more.

I included the picture of Cher to illustrate someone (mis)using a ceremonial headdress for secular purposes. It doesn't matter if she's 1/16 Cherokee. Her Cherokee ancestors didn't wear outfits like hers, so she's contributing to the stereotyping of these people.

People were less sensitive to these things in those days, so I'm not saying she's bad. But I'm also not giving her a pass by omitting the picture. People were ignorant then and they often still are, and the picture reflects that.

But for your sake, I added a few images besides the one of Cher. I trust they'll bolster my point: that people shouldn't trivialize Indian culture.

Related links
The harm of Native stereotyping:  facts and evidence