An old article gives an old example of using "Indian Country" to refer to enemy territory:

Gulf still "Indian Country"
The problem continues in the war on Iraq: 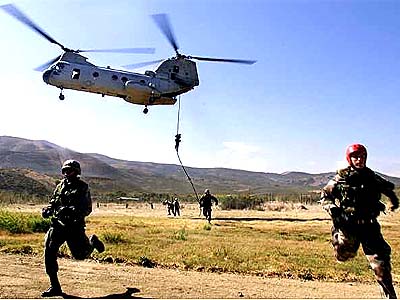 More on the story
From Matthew Richter, editor of American Comments magazine:

Al Carroll's thoughts
Al's reply to my comments on "Indian Country" in Indians in the Military:

Rob's reply
You're obviously way ahead of me, since you've listed the few connections I know and several more.

Perhaps we associated the Vietnamese and Bin Laden's terrorists with Indians because they were exceptionally ruthless. Or perhaps because we suffered a great loss at their hands.

The Viet Cong and Rambo connections are interesting. We often think of Indians as vicious savages (the Viet Cong), but also as noble warriors (Rambo). The polar opposites suggest that maybe Indians and our Vietnamese opponents embodied good and bad. In short, that maybe both groups were people, not faceless symbols.

The comparisons continue
From Our Indian Wars Are Not Over Yet:  Ten Ways to Interpret the War on Terror as a Frontier Conflict by John Brown:

More on enemies as Indians
Soldiers vs. Indians again

Related links
Indians in the military