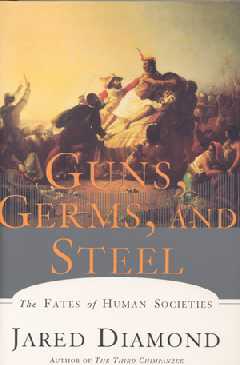 A few exchanges on Jared Diamond and his book Guns, Germs, and Steel (a book I recommend despite my criticism of it below). We begin by discussing whether a culture's "worldview" matters:

Why nations conquer: technology or worldview?
>> If you follow [Diamond's] reasoning, and I tend to, the worldview is not all that important. A health people with communicable diseases, with guns and with good supplies of surplus food will dominate and replace a susceptible people without guns/steel living a hunter gatherer existence. If the Americas were the only example then policy would be critical, since we have so many examples, something other than policy is key. <<

A healthy people with diseases, guns, and steel...and a worldview that presupposes a divine right to conquer the world...will dominate and replace a susceptible people...etc. The previous poster is correct that "morality" or "philosophy" is a factor. And that Diamond didn't address it.

If guns are a necessary component, all the "many examples" must involve Europe's conquest of other lands, so we can't disentangle the technological "facts" from the philosophical or religious ones. The best non-European example is China, which did have gunpowder but didn't think it necessary to use it to conquer other lands. Instead, the Chinese rulers were largely content to stay within their borders, deeming their kingdom "divine" as it was.

Genghis Khan and his Mongol Empire only prove the point. Namely, that China could've pursued an expansionist worldview and increased its territory, but didn't. With the exception of Genghis Khan.

Because Diamond doesn't address the philosophical issues, he doesn't address why Europe conquered most of the world but China didn't. The previous poster is correct. The book is lacking because it omits this telling point.

>> But if I have better technology I and my descendents are likely to replace you and yours unless you change your society and adopt my technology. That is pretty much inevitable. Unfortunate, but inevitable. <<

It's inevitable if you go sailing the ocean blue, colonizing other lands, and generally putting yourself in the position to replace other people. Again, the Europeans did it and the Chinese didn't. That's a function of the worldview each group chose, not the "inevitable" workings of progress.

>> Why not? We can both want to spread out and dominate our neighbors but one of us could have the capability. If the Incas, for example, had the technology they would have landed in Spain and pushed the Spanish around. <<

Here's where the facts end and the speculation starts. Many cultures have been expansionist, but many have not. Expansionist: Egypt (New Kingdom), Rome, the Mongols (under Genghis Khan), Spain, Britain. Non-expansionist: Egypt (Old Kingdom), Greece (before Alexander the Great), China, India, Maya, Japan (until the 20th century).

Japan is another good example. In the last few decades, it's proved it could make itself into a world power if it wanted to. But it didn't do so before this century.

Why not? Because its worldview was isolationist, not expansionist. Japan didn't believe it had a "mission" to spread its religion or economy to the people of the world.

When Japan did undertake to Westernize itself, it emulated Prussia, not America. As Ian Burema wrote in his review of The Making of Modern Japan (LA Times, 11/19/00), Japan became "not a democracy based on free commerce and parliamentary debate but a quasi-democratic authoritarian state based on military values. Germany, in other words, was the main model, not Britain, the United States or France."

So Japan adopted the worst elements of Western civilization and, not surprisingly, became a corrupt version of the West. The point is that this was Japan's conscious choice, not the inexorable workings of fate. It's a classic example of a nation's choosing its worldview and reaping the rewards (or punishments).

And after WW II, we imposed peaceful democracies on the military dictatorships of Japan and Germany. Both countries successfully changed their cultural orientation in just a matter of years. That alone shows you how mutable worldviews are—how easy it is to adopt one and discard another.

>> just about every culture/every civilization in history has tried to [dominate others].
from mesopotamia to early china to india to eurpoeans to azteks/etc. <<

To dominate their neighbors, maybe. To dominate continents or the whole world, no.

Fighting with neighbors requires little more than means and motive: short-term self-interest. Conquering continents or the whole world requires long-term strategy, mobilization, and commitment. The conquest of the Americas didn't just happen because a few monarchs were greedy. It happened because the Church and State—everyone who mattered, basically—believed it was right and necessary.

If their motive had been personal gain rather than philosophical belief, they wouldn't have committed vast resources to conquest and colonization over the decades. They were impelled by their chosen worldview, not by territorial instinct.

Book review supports claims against Diamond
From Jonathan Kirsch's review of One True God: Historical Consequences of Monotheism by Rodney Stark. In the LA Times, 11/3/01:

Buy it now
Curious about the book Guns, Germs, and Steel, which Rob rates a 7.0 of 10? Click here to get it now.

More on Guns, Germs, and Steel and Jared Diamond
Diamond blames the victim

Related links
The myth of Western superiority
Those evil European invaders
Genocide by any other name...
Native vs. non-Native Americans:  a summary

Readers respond
"BTW, colonialism was not at all limited to Europeans. The Arabs were big at it for a while. The Chinese were, and still are."
"Actually he does address this point, though in a very sketchy fashion."
"Diamond did explain a bit how some worldviews developed."