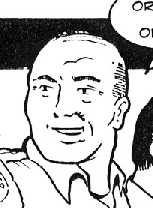 (G)nat Gertler, a journeyman comic book writer, has criticized the 1999 version of Culture and Comics Need Multicultural Perspective online. In particular, he's accused me of making false and misleading statements—of being a liar, basically. Here's an example of Gnat's charges (forwarded by someone to me):

My response to Gnat
I responded to Gnat's original charges when he made them in 1999. Here's my reply to his latest charges:

Posting behind my back, eh, Gnat? Still afraid to e-mail me directly? Well, here's my response to your latest screed on my essay. As usual, I'll disprove your continuing lies and misstatements about me.

>> Oh, for example, he was sending around one rant (which, of course, ended with a plug for his book) <<

That's called good marketing, Gnat. You know, as opposed to shameless bad marketing? The kind you indulge in?

Let's remind everyone of what I said in a previous message:

By the way, marketing is a necessity when you're a self-publisher like me. If my comic book were famous, I wouldn't waste my time promoting it. I have better things to do than trying to get the word out—like writing actual stories.

>> he was talking about the lack of minority solo title characters in comics on the top 100 list. <<

Wrong, little bug. What I talked about was the lack of minority characters in general. I used the lack of title characters as one example. Nowhere did I state anything about any "top 100" list.

But don't take my word for it. Reread what I said in the original essay. You'll see how badly you've misstated my case.

>> In this count, however, he left off (most visibly) Spawn, an African American superhero <<

I addressed your objection at length, Gnat. Let me repeat it, since it obviously didn't sink it:

I don't consider a decaying corpse a member of any race. Why? Because I know something about science. The latest scientific findings say race is only skin deep—and Spawn's skin is going or gone. When you go beneath the skin to the muscles, organs, and bones, people are all basically the same.

With DNA you may be able to identify (emphasis on may) which race a decaying corpse or skeleton came from. That doesn't mean it's still a representative of that race. That's a matter of opinion and my opinion differs from yours.

I'm not the only one who feels Spawn isn't black. Here's one of the dialogues that ensued after I posted my original essay in 1999:

>> The human identity of Spawn, AL Simmions IIRC, was a black man before he was killed. When he came back as Spawn, his face (and body I guess) was the horrible ugly thing you usually see. One of the first things he tried to do with his powers was to look normal so he could go to his wife; however, healing his scars showed his new body to be white. <<

To summarize, Spawn's racial categorization is arguable at best. Some people don't think of him as black. Others note his transformation into a white man (like a corpse, a shapeshifter doesn't necessarily belong to a race). Still others, like me, argue that a decaying corpse loses its racial characteristics.

>> (and, when this absence was pointed out, he acted obnoxious while trying to defend this absence, so it cannot be chalked up as "an honest mistake".) <<

We don't need to chalk it up as a mistake at all, since it's an easily defensible argument held by many people, all with honorable intent. The only falsehood here is your claim that I'm ignoring your gnomish wisdom. I haven't ignored it, I've disputed it. And refuted it.

Let's recap: I argued my position, you argued yours, and several people supported me. No problem there; I acknowledge your right to disagree with your betters. What is a problem is your continued pretense that my position isn't defensible, even though I've defended it. And that I'm "covering up" Spawn—lying about his existence—to make my thesis work.

My argument works fine whether you count Spawn or not, Gnat. If you want to waste your time arguing your point of view further, go right ahead. But **quit lying** about what I've said.

By the way, I assume you'll get to all the other "lies" in another message, since this is only one "lie." Or did you lie about the number of lies, too?

Nope, there's "disagreement" for you. Do you need me to define these words, or can you use a dictionary on your own? Judging by your previous misstatements, I'm guessing the former.

>> As for "misleading", I'll note that he posted that rant in non-comics forums... where folks may not realize that the percentage of real minorities in comics cannot be judged by comparing the count of title characters versus the number of titles (100) <<

Incredible. The problem with this flat-out fabrication is that I didn't try to calculate any percentage based on a top 100 list. You've invented a false and phony straw-man argument in your attempts to slander me.

As I said at the time, my essay was an introduction to the subject of minorities in comics. Coming to a quantitative conclusion would've taken reams of data and analysis. My essay didn't attempt a mathematical proof and didn't require one to make its rhetorical point.

Again, the only lie here is your claim that I tried to do something I didn't do. Again, reread my essay if you've forgotten it. You'll see there are no percentages about minorities in top 100 comics.

So what? I didn't say anything about books like ACTION because my point was about books with title characters. Like SHOWCASE, TALES TO ASTONISH, and MARVEL FANFARE, ACTION and AVENGERS don't prove or disprove my claim. They don't fit the claim one way or the other.

But to refute your continuing nonsense...which Avengers minorities are those, Gnat? The Black Panther? The Falcon? Living Lightning, perhaps?

You must be counting mutants, androids, and Norse gods if you think the Avengers roster "generally" has minorities. But as I told you before, I'm talking about real minorities—"minorities" as defined by the US Census Bureau—not fictitious ones. Mutants and androids don't count and neither do Kryptonians or Amazons.

You yourself used the phrase "real minorities" (quoted earlier), Gnat. So list all the real minorities in the Avengers for us. Tell what percent of the time the Avengers have had real minority members on active duty. "Generally"? Try "occasionally"—much less often than the laws of probability would account for.

Once again, you falsify my claim and then call me a liar because of your falsehoods. This is an excellent example of your continued sophistry.

>> On top of that, a number of title characters belong neither to the majority nor a minority, the most immediate example being the space alien who is the title solo character of Superman. <<

Wow. De Nile ain't just a river, obviously. Someone's in denial about race here, and it sure isn't me.

If I had made a quantitative argument—which, again, I didn't—I trust I wouldn't have to defend the inclusion of Superman in the ranks of Anglos. Check your glasses, Gnat, because he's definitely white-skinned even if he's an alien. He's white enough to have children with white (and other) human beings. And he acts white and passes for white, which is part of his sociocultural identity.

But what matters here isn't the genetic happenstance of his white skin. What matters is the genetic choice of his creators. They made him white because it fit their worldview. And that's what I'm talking about.

Let me put it this way: By my reckoning, Superman is at least as white as Spawn's corpse is black. Again, you're free to disagree. But to call me a liar because you're too prejudiced, ignorant, or stupid to understand my argument is the worst sort of calumny. It's a vile, vituperative lie.

If you enjoy my proving, in every public forum I can find, that you're a bald-faced liar, Gnat, keep right on lying about me. I'll be glad to rebut your lies from here to Kingdom Come—and I don't mean the comic book. Capeesh?

P.S. In the updated, 2000 version of "Culture and Comics Need Multicultural Perspective," I happily limited my claim to title characters in DC and Marvel superhero comics and noted the presence of BISHOP. That's how concerned I am with being accurate and honest.

People can read this essay and judge for themselves whether I lied about minority superheroes in comics. Or whether you, Gnat, lied about me.