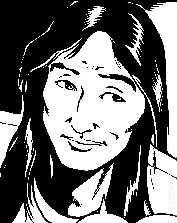 Written by Rob Schmidt, and illustrated by Ron Fattoruso and Mike Kelleher, Peace Party tells the story of two young friends who are chosen by the gods to become super-heroes. Similar to Kurt Busiek's Astro City, the series uses the super-hero genre to tell character-based stories that explore everything from prejudice and pollution to super powers and the supernatural.

"Comic book publishers must reach new readers with new kinds of stories, or suffer," explained Schmidt. "Thus, Peace Party is the right comic for the times."

Having received accolades from the comics industry and beyond (including a $1,000 grant from the Puffin Foundation), Blue Corn Comics has not only dedicated itself to celebrating Native Americans through Peace Party, it's also committed to donate 10% of the profits to organizations such as the American Indian College Fund.

The 32-page Peace Party #2 (JUL991265F) is solicited in the July Previews for September shipping.