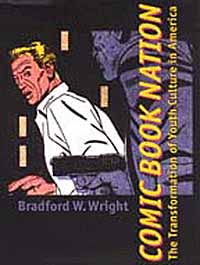 From pulp literature to pop art by Andy Warhol and Roy Lichtenstein, the influence of comic books and related media—comic strips, TV cartoons, animated movies—has been subtle but pervasive. The Baby Boomer generation grew up with Peter Max, Charlie Brown, and Scooby Doo. More recent generations have added video games and the Internet to the mix. But whatever the mix, we're seeing the increasing comic-bookization of the media.

Some quotes help make the case:

Related links
Super Prose:  How Comics Can Make You a Better Writer

The influence on video games
I think it would be fair to say video games sprang primarily from comics and cartoons. The idea of seeing people move in sequence is central to both. The following article documents the rising influence of video games, and thus indirectly of comics.