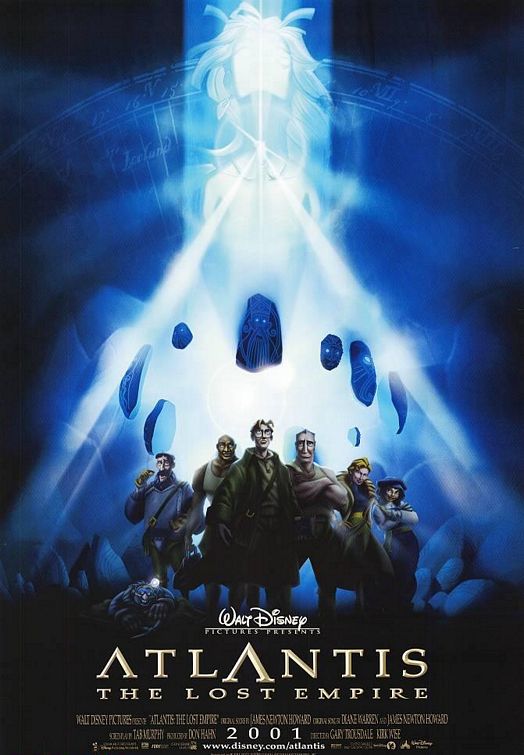 On 6/28/01, before I had seen Disney's Atlantis: The Lost Empire, I wrote the following to a correspondent who had seen it:

Where does Atlantis occur...in an underwater cavern? Or does the submerged land rise to the surface again?

I ask because I've seen pictures of the Atlantean "natives" in picture books. I notice they're wearing skimpy clothing. (Most ancient Mediterranean people wore full togas or robes.) I'd expect an underwater culture to be cold.

Hmm. Loincloths, face paint, crystals...sounds like a superficial New Age version of an "primitive" indigenous culture, to me. Did the Atlantean culture have any unique traits or depth to it? Or was it like old B-movies where the natives worshipped the volcano? Like the original Star Trek episode where the primitives in skimpy outfits worshipped Baal, the great "god" who provided their food and energy?

I hope I don't need to tell you that "primitive" religions are usually as complex as "advanced" religions, if not much more so. I understand Christianity better than I do the Hopi religion, for instance. I'd hypothesize that Christianity has spread so far and wide precisely because it's so simplistic. "Do as God and Jesus say and you'll go to Heaven" pretty much sums it up.

And no, "it's just a cartoon movie" isn't a sufficient excuse. Pocahontas, Hercules, and Mulan all presented a foreign culture reasonably well on a cartoon level. I'd expect an invented Atlantean culture to have distinct culture traits as well. If it didn't, I'd have to criticize it as being stereotypical.

More questions
She responded and I sent some followup comments on 9/7/01: 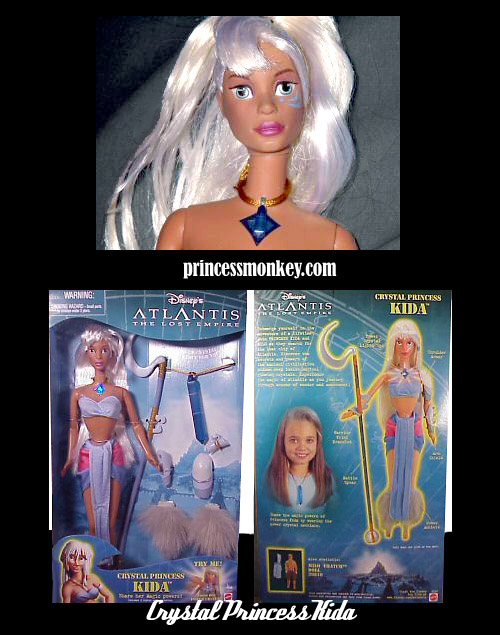 >> They aren't "wrong" to worship the crystal, in the sense that it is sentient, helps them and does everything they believe that it does. <<

What is this crystal supposed to be? A magical artifact? A technological or alien artifact? If you gave a culture the next-generation supercomputer, it ran their society for them, and they worshipped it as a god, would that make them more or less advanced than us?

>> It's kind of a dopey and not too exciting movie, but the Atlanteans are such a mixture of various cultural borrowings that I'm not aware that they're based on anybody specific. <<

>> Also, as I said, since the crystal is everything they think it is, I wouldn't say they're shown as being primitive — for the most part, they think their visitors are primitive. <<

I'd say that's pretty common when Western cultures meet indigenous cultures. The indigenous people may admire and adopt particular gizmos, but they don't immediately think, "Gosh, my culture is inferior because I don't have a microwave or an SUV."

Atlantis stereotypes Indians
To recap: When I heard about Atlantis, I thought it sounded like a New-Age ripoff of indigenous people. You know, a mysterious race of scantily-clad nature-worshippers that depends on magic crystals? But my correspondent seemed to indicate there was no connection between the imaginary people of Atlantis and real Native Americans.

Oops. Turns out I was right and she was wrong. Atlantis: Milo's Return (2003) spells out the connection between Atlanteans and Indians. I watched this direct-to-video sequel recently and here's the scoop: 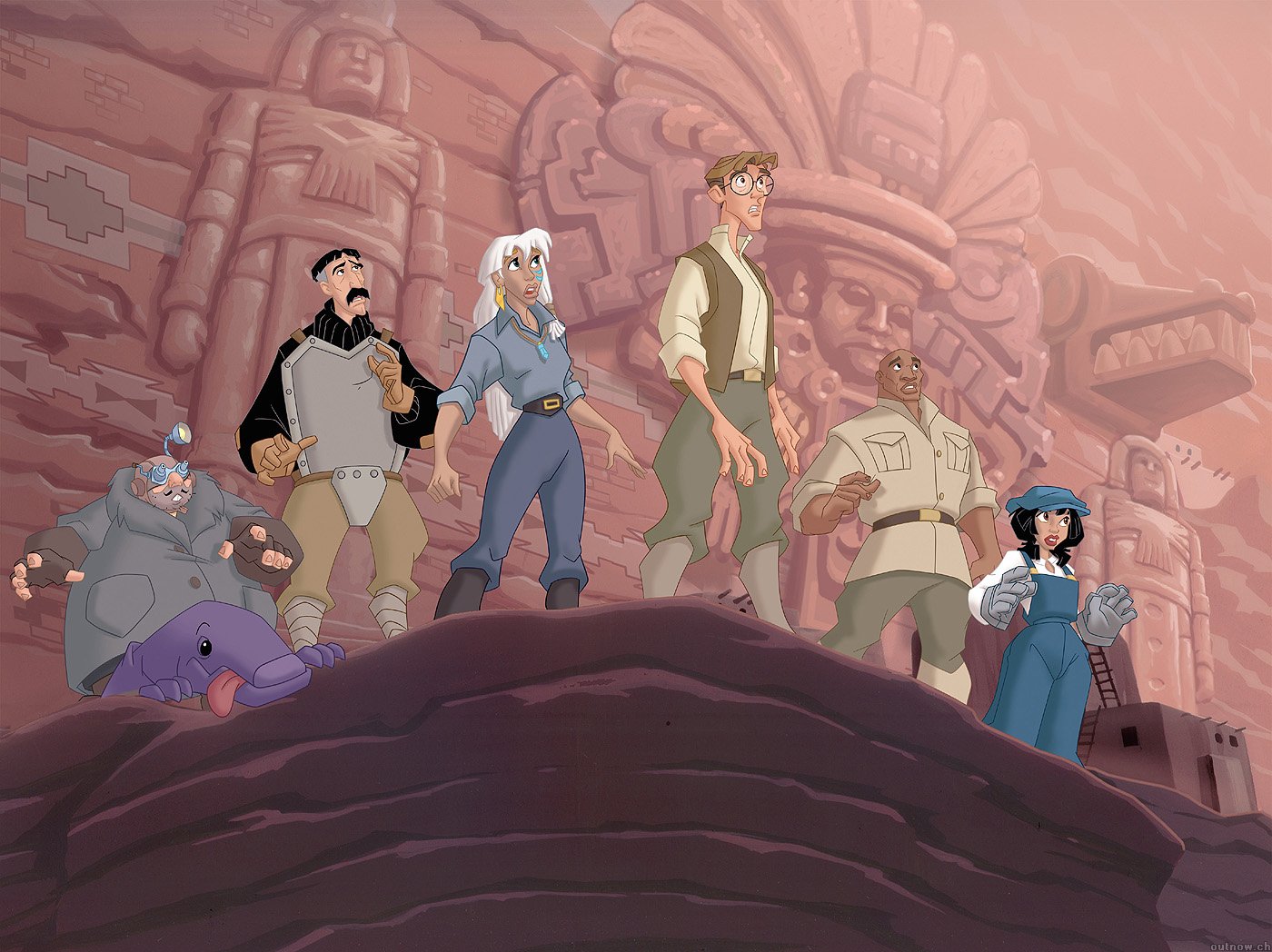 In one of its three stories, Milo's team meets an Indian named Chakashi (voiced by Floyd Westerman) in the Southwest—repeatedly. Chakashi is a member of the fictional Nashoni tribe. He tells them about the Nashoni's legendary "Crystal Guardian: our great teacher and protector." Specifically, the Crystal Guardian "revealed many secrets to the Nashoni: the path of the stars, the time to plant, how to heal themselves."

The team locates an underground city that resembles Mesa Verde with Mesoamerican statues. "It's a blending of every culture from Idaho to Peru," someone says: "Nashoni, Aztec, Maya, Olmec." "The Crystal Guardian's teachings influenced all these cultures," someone else says.

Oh, really? So every North American Indian culture is an offshoot of Atlantis? Hmm.

This is typical of how New Age beliefs stereotype Native people. Atlantis 2 implies they weren't able to do everything they did by themselves. It implies their cultures were derivative, not original. Natives come across as less competent, like children, because they, unlike Atlanteans or modern people, needed help to develop their astronomy, agriculture, and medicine.

P.S. I'm still not sure where Atlantis was located. I think it was in a volcanic cavern underneath the seabed. Since the life-giving crystals were dead or dying when the first movie began, I don't know how the Atlanteans obtained air, grew food, or survived the crushing pressure. The magic of unscientific movies, I guess.