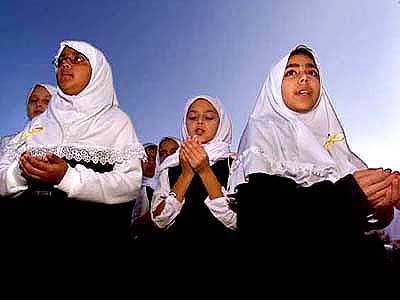 Correspondent Karyl sent me the following e-mail that was making the rounds after 9/11:

One, this leaves out all the terrorist activities not conducted by "Muslim male extremists": the Oklahoma City bombing, the abortion clinic bombings, the Atlanta Olympics bombing, the anthrax attacks, etc. If you want plane hijackings over the last 30 years, the criminals include Anglo-Americans, Asians, Cubans, and so forth. If you want terrorist kidnappings, there are examples in Colombia, the Philippines, and elsewhere—not to mention the SLA's kidnapping of Patty Hearst here in Southern California.

This fellow has chosen a couple of hijackings, a couple of bombings, and a couple of kidnappings to justify his crusade. He carefully selected a list of offenses committed by Muslim males, then said, "Look! Muslim males are guilty!" Well, sure, if you pre-select a list of their offenses.

Two, "Muslim" is a religion, not an ethnic group. It's not something you can profile at a glance. The so-called "Muslim male extremists" came from Iran, Pakistan, and East Africa—all non-Arabic locales—as well as Arabic locales. Since this person can't pin the problem down to Arab males, what does he propose—checking everyone's religion before they board a plane?

Three, the age range is mostly bogus. We don't know exactly who planned the bombing of Pan Am Flight 103 and the US embassies in Kenya and Tanzania or the kidnapping of Daniel Pearl. Many of the conspirators in the WTC bombing were older than 40, as are many of the opposition forces in Afghanistan. Osama bin Laden is older than 40, of course, as are most of his lieutenants.

Why do you waste time with these things? They're always wrong if you think about them.

Comments from my friend, Don, about your Muslim message, fyi— 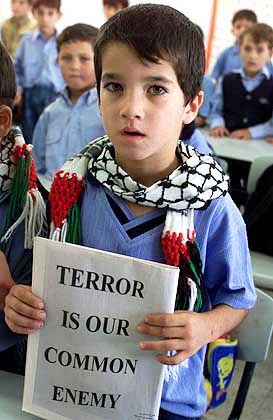 Rob's reply to Karyl (6/11/02)
Don admits the real problem is Muslim Arabs...he admits many Arabs aren't Muslims...he admits it's impossible to profile Muslims...but he says my arguments aren't "overwhelmingly convincing"?! Since he wants something that's impossible by his own admission, I'd say his arguments aren't overwhelmingly convincing. My argument—that you can't profile people because of their religion—is 100% true and therefore perfectly convincing.

Don may want to brush up on the latest news. Jose Padilla, the man suspected of plotting to set off a "dirty bomb," is a Muslim and a Hispanic. John Walker Lindh is a Muslim and a Caucasian. I believe Richard Reid, the shoe bomber, was an Englishman with a Jamaican mother (i.e., half Caucasian and half black, presumably). The most recent terrorist kidnapping were in the Philippines and Colombia. The most recent terrorist bombings were in Peru and Pakistan. Etc.

A sizable minority of African Americans have converted to Islam. Many of them are upset by America's pervasive racism. So do we profile all blacks as potential terrorists? Or just blacks like Louis Farrakhan—i.e., members of "radical" groups like the Nation of Islam? Haven't they talked about "destroying the system" often?

The latest reports about Al Qaeda say the terrorists are clever enough to start recruiting disgruntled, non-Arab US citizens. So profiling Muslims is impossible and profiling Arabs is useless. It will succeed in destroying our civil rights without catching anyone.

Throwing around terms like "Muslim" and "Arab" as if they're interchangeable is the height of irresponsibility. Anyone who does it isn't thinking, he's reacting irrationally and lashing out emotionally. Trying to profile people, and profiling the wrong people, will only give us a false security blanket while the terrorists plot some of their many alternatives.

Did Don also favor racial profiling after the Oklahoma City bombing? How about for the ongoing anthrax investigation? Would he have profiled the likely suspects: white, male right-wingers? Why not, if he's serious about using racial profiling to catch criminals?

Unless you use it in every case where it's applicable, you're discriminating among cases and choosing those cases involving minorities. Discriminating on the basis of race is called racism, and that's what racial profiling is. I don't know about Don, but my civil rights are too valuable to throw away on a witch hunt for terrorists who are smart enough to avoid it.

I wouldn't offer the FBI's sorry record of domestic spying and civil rights violations as an argument for anything. This record shows that if you give the FBI an inch of the Constitution, they'll take the whole thing. Again, not an overwhelmingly convincing argument for racial profiling.

Racial profiling is merely the first step on a slippery and dangerous slope.

>> Rob makes some valid points but not overwhelmingly convincingly. <<

My arguments are a heck of a lot more convincing than Don's have been.

>> it should be Muslim Arabs to distinguish them from the millions of Muslims who are not Arabs and those Arabs who are non-Muslim. <<

>> However, no customs officer can look at an Arab and tell his religion. <<

Please thank Don for me. He contradicted himself so I didn't have to do it. It's so much easier when people invalidate their own arguments.

The notion of profiling Muslims is demonstrably stupid. Point proved and case closed.

>> However, while acknowledging that there a whole lot of home-grown American terrorists (Southern segs who fire bomb black churches, anti-abortionists who blow up abortion clinics etc), they are not the problem here. <<

Aren't they? Says who?

The 9/11 terrorists had been in the country legally for several years. Since then they've recruited people like Richard Reid and Jose Padilla, who don't fit the so-called profile. So we can't target Muslims, by Don's own admission, and we can't target newly arrived foreigners. I await Don's definition of a group he thinks we can target.

>> These groups are not threatening to attack other aircraft or other American landmarks or detonate radioactive devices. <<

It's racist to profile people for one small problem while not profiling them for the much larger and more obvious problems. Profile all the criminals, including terrorists, or none of them.

>> I see nothing wrong with profiling Arabs. <<

It violates constitutional provisions for "equal protection under the law," for starters.

There are several million Arab Americans in the US, I think. So we're going to infringe on the rights of millions of people for the slim chance of finding a handful of terrorists? What about Iranians, who aren't Arabs? What about Jews, who are Semites like Arabs and are genetically indistinguishable? Profile them too?

No doubt they're laughing at us as we slowly shred our freedoms, exactly as they want. Whew! I find the naivete of profiling as a "solution" breathtaking.

He attacked US soil once and so did Al Qaeda. One could find countless right-wing threats if one looked for them, same as Al Qaeda's threats. So the circumstances are rather similar.

When Don submits himself for profiling every time he enters a government building, then I'll believe he's sincere about cracking down on deadly threats to America. Until then, profiling remains a thinly disguised form of racism.

>> In the 60's the FBI profiled those who were killing black civil rights activists. <<

Yes. They also profiled the black activists. They did a poor job of catching real criminals, but a great job of curtailing the activists' civil rights. What Don apparently doesn't "see wrong" is that he wants to recreate the situation that led to well-documented abuses and violations of the Constitution. He may want to curtail our civil liberties to protect himself from imagined threats, but I don't. I prefer having the threats and the liberties.

It's needed to shut down corporate malfeasance, which is throwing people out of jobs and robbing them of their pensions. It's leading to a widening gap between the rich and the poor that someday may lead to social unrest to dwarf the Rodney King or WTO riots.

Again, that's a far worse threat to America than either terrorist attacks on isolated buildings or "street crime" such as crack-dealing. Overreacting to one attack is a waste of our time, resources, and energy.

Conclusion
Don first says he wants to profile only Muslim Arabs. Then he decides it's okay to profile all Arabs. He ignores the fact that many of the criminals in the original posting are Iranians, Pakistanis, Afghans, East Africans, Indonesians, Filipinos, et. al—in other words, non-Arabs. He also ignores the fact that many of them are outside his target age range of 17-40.

In short, he seems to want to profile anyone who's a Muslim or an Arab. Or perhaps anyone who has brown skin and a "funny name" (to be on the safe side). Who knows what Don wants, since he doesn't seem to know himself?