In which our two stalwart heroes say good-bye to the 1900s:

It's time for our once-every-millennium greeting to friends and family.

Again?  It seems like only yesterday that we were wishing Eric the Red and his crew well.

If you mean that red-headed guy you bumped during the pick-up game, it was yesterday.

Ah, that explains it.

Sure.  I have the beer, chips ‘n' salsa right here.

I'm talking about the essentials for the end of civilization as we know it. 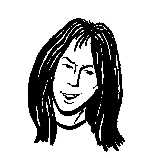 <sigh> So what should we tell people for the new millennium?

You and your legalese.  Can't you hold it for one night?

If this isn't the millennium, then we have nothing to commemorate.

Speaking of old, this argument must be 1,000 years old.

So's this pueblo, but you don't see me ignoring it.  Why not address the point?

As mother would say, "Because."

<rolls eyes> If you insist.  Let's get on with our greeting.

Okay, what'll it be?

I prefer my message of "Peace."

And I prefer "Party."