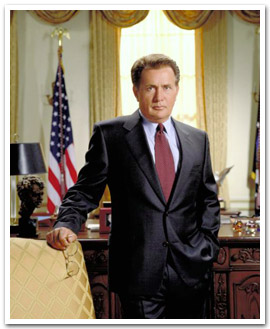 A continuation of my Indian Comics Irregular essay "The Indians in the Lobby":

Rob queries advisor
On The West Wing last week, the chairman of Wisconsin's Stockbridge-Munsee tribe (another real tribe, thankfully) supposedly had an appointment with a White House official the day before Thanksgiving. When the appointment was canceled, the chairman and his assistant staged a sit-in (actually, a stand-in) in the lobby. Do something about our problem, they demanded, or we'll make a unpleasant scene.

My question is how realistic do you think this scenario is? To me it seems to buy into subtle stereotyping. Namely, that Indian politicians can't deal with Anglo politicians on an equal, government-to-government basis. That they have to engage in a '60s-style protest because they don't have a better method of redressing grievances. It felt like an update of the stoic-Indian stereotype, with Gary Farmer playing a chief who impelled action with his quiet dignity.

Any thoughts on this?