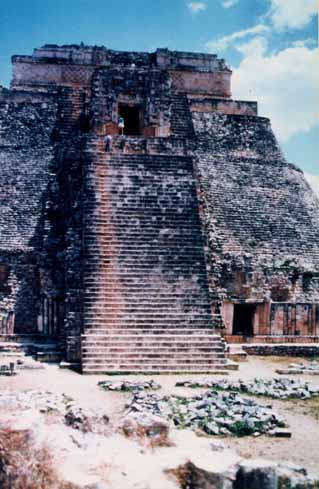 Ramshackle houses open to the air. Yards filled with rusting hulks. Plazas commanded by stone cathedrals. Children milling about. A woman breast-feeding a baby. Curs slinking by. The ubiquitous Coke and Marlboro signs.

The trip to Uxmal (oosh-mahl), one of the best Maya sites in Mexico, had begun that morning in M‚rida, the capital of Yucat n state. Now far from CancŁn's bright beaches, we were seeing Mexico unvarnished, and it was an eye-opener.

Our van began to climb and dip through rolling terrain. The land was drab and featureless. We couldn't fathom why the Maya had settled out here, far from the tourist trade. What had been the matter with them?

Arriving, we got out and wiped our brows. Up a rise and there, looming like an ocean liner through a fog, was the Pyramid of the Magician.

The imposing triangle filled the empty plain, looking much taller than its hundred feet. We could guess how it had dominated the surrounding countryside, drawing people like a magnet. It certainly held our gaze.

We sat in a shadow as our guide, Felipe, explained the history of the Maya: how their civilization flourished from AD 300 to 925, how they built Uxmal using only stone tools, how the city contained the best art and architecture of the Puuc ("hill") style, and how the Maya ultimately abandoned the site and disappeared. 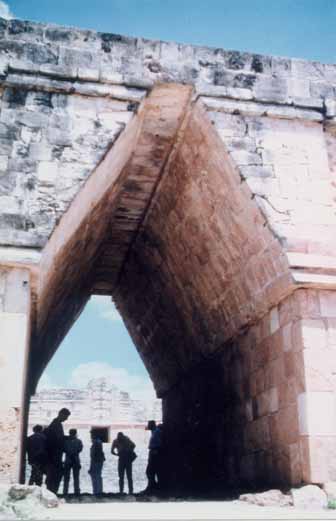 It was all hard to absorb on this sunny day.

We toured Uxmal's most important buildings: the Governor's Palace, a long rectangle topped by an elaborately carved facade. The House of the Turtles, as perfectly proportioned as a Greek temple. The small Ball Court, two bleachers facing a corridor between them. The Nunnery, a spacious quadrangle of buildings.

One motif repeated itself over and over: the visage of Chac Mool, the Maya rain god. He stared at us, his eyes glaring, mouth grimacing, and nose curling downward like an elephant's snout.

We emerged from the Nunnery to confront the great bulk of the Pyramid. The Maya supposedly built the conical structure for a dwarf who hatched from an egg and bested a king in three contests. Whatever. They constructed it in tiers, and at the top they placed the Temple of the Magician, its doorway forming Chac's gaping mouth. The old boy seemed to be everywhere.

Felipe gave us a few minutes to climb the Pyramid's steps, if we wanted. Most wisely declined, but I had to try.

I took the stairs two at a time, mainly to keep myself from thinking about what I was doing. I hunched over the chain draped down the incline, ready to grab it if I slipped. The steps kept coming, 91 in all. Why had the Maya made them so narrow and high? To prove how macho they were?

In a minute I reached the top of the platform and backed against the Temple. There was nothing between me and the empty air except a tiny strip of stone. One gust of wind, one flash of dizziness, and I'd go tumbling down.

The view from here was grand, but it was too hard to 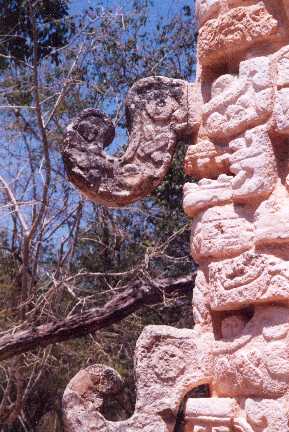 enjoy. I edged across the ledge, grasped the chain firmly, and began to lower myself. I kept my eyes on the steps and didn't look down. Someone came past me, hopping jauntily down the stairs. I thought he must be a mountain goat or a fool.

I finally hit the ground and caught my breath. My lungs ached as if I'd been sprinting; my skin flushed as if cooked. I hurried to rejoin our group.

As we drove back to M‚rida, the sky grew grey and cloudy. Lost in our thoughts, none of us spoke.

It was impossible to imagine Uxmal paved and painted, thronging with Indians in their finest raiment, skins and plumes and jewelry. Why had the Maya built their city here, and why had they left? What had the Spanish felt when they came across the Pyramid rearing majestically out of the desolation? The shock must have brought them to their knees, praying for guidance from their Lord.

Rain began to fall, lashing the van so hard we had to close the windows. Was Chac Mool crying, angry with us for our lack of understanding?

As I pondered this, beams of sunlight broke through the clouds. They spread like a fan across the sky. Chac was pleased with us after all.

It was the only time it rained during our entire trip.