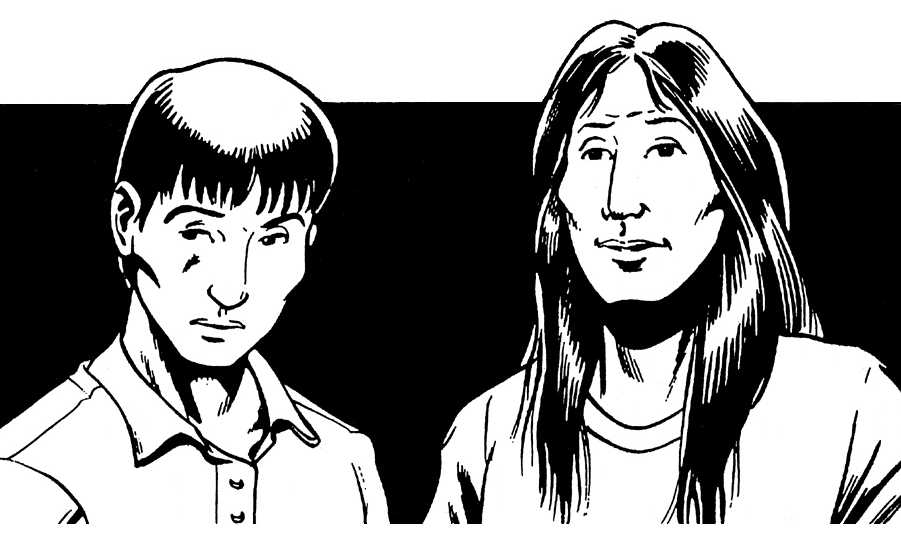 I originally wrote this as a scene from a nonexistent story. This scene consisted of what is now page 2. Someone raised the issue of having a Jewish character who was a janitor, so I created a scene around the notion.

Later I decided this would make a good try-out for prospective artists. I added page 1 to make it a true story—albeit a short one—titled "Mopping Up." Below is how Argentinian artist Gervasio handled the story.

In the center of the frame, two figures are pushing through the glass doors of the building: Billy in his usual suit, and Drew in his usual t-shirt and jeans.

3. BILLY: —wanted to meet us, show us the company she's built.

PANEL 2:  Billy and Drew walk down the corridor of the office building. Billy is serious and straightforward. Drew is more animated and gestures.

The words on Drew's t-shirt say: No Tontos

6. DREW: So what's the problem again?

7. BILLY: Husband claims she's hiding her assets. She swears she's put all the money into the business.

PANEL 3:  They come across a startling scene. Inside an office with a big glass window, a middle-aged Indian woman is tied to a chair. She has long black hair but is dressed like any businesswoman. Two thugs are standing over her, glaring and waving their guns menacingly.

Billy and Drew watch this scene from across the corridor. They flinch and pull back so the crooks won't see them.

PANEL 4:  Drew stares at the scene intently. Snake-like lines radiate from his head as he makes psychic contact with the woman. Billy puts one hand on Drew's shoulder to stop him from doing something precipitous. With his other hand he reaches into his jacket for his cellphone.

15. DREW: She's afraid for her life. Doesn't know anything about missing money.

16. DREW: This is the perfect chance for us to play heroes!

PANEL 5:  Billy starts to raise the phone to his ear but it goes off. (Show it vibrating or something to suggest an incoming call.)

18. PHONE: Bum ba-da-bum ba-da-bum-bum-bah— [Musical notes should accompany this text to show it's a ringtone.]

PANEL 6:  Billy and Drew take off at a run. Billy still has the phone in his hand. Behind them, shots ring out.

PANEL 7:  Running side by side, Billy and Drew race down the office building's corridor with the armed criminals in pursuit. Further down the corridor is a janitor who's bent over his work, mopping the floor. The janitor is a middle-aged white man who looks vaguely Jewish. He's been mopping a stretch of the corridor and it's wet from wall to wall. Nearby is a bucket and one of those small, stand-up "Wet Floor" signs.

24. DREW: How many times do I have to tell you about relying on technology? 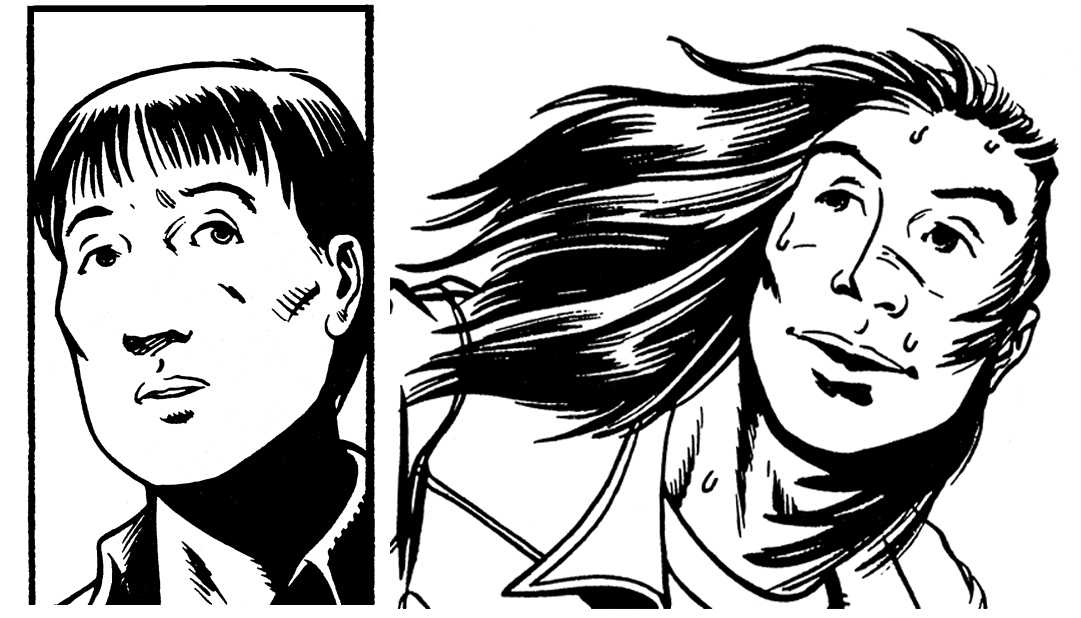 PANEL 1:  Closeup of the janitor. He's startled by the approaching commotion and turns to stare at it.

A name tag over his heart reads: A. David

PANEL 2:  Billy (who mastered his powers long ago) gestures arcanely at the floor in front of him and Drew.

PANEL 3:  Closeup of their running feet. The floor, which looked silvery-slick with water, now appears bone-dry as they pass the janitor.

PANEL 4:  As he continues running, Billy gestures behind him at the same stretch of floor. A shallow wave of water appears and washes over the floor.

PANEL 5:  The water flows around the criminals and laps at their ankles. They look down, poised awkwardly, dumbfounded.

PANEL 6:  The criminals lose their balance and go slipping and sliding in all directions. Exclamations, gunshots, and splashes ring through the corridor. Braced against the wall, the janitor looks on in amazement.

PANEL 7:  Tight closeup of the janitor looking panicky, as if he's about to have a heart attack.

9. JANITOR:  Mother told me I shoulda been a doctor!

PANEL 8:  Billy and Drew continue running as the floundering criminals recede behind them. Billy finally has a moment to punch numbers into his cellphone. As he does so, Drew ribs him good-naturedly.

PANEL 9:  Longshot of Billy and Drew from above and behind. They exit through a door into the light. Billy has the phone to his ear.

14. VOICE (from phone): Hello, this is 911. Please state the nature of your emergency. [Balloon should have jagged lines to show it's an electronic communication.]