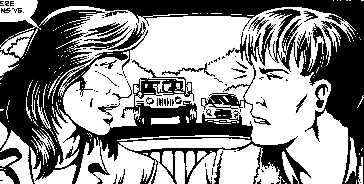 Rob's reply
Good job! I'm glad to see someone appreciates our multicultural take on the world.

To answer your questions: I'm not sure many fans would pay to read a comic about the Pueblo origin myths. More important, I'm not sure the Pueblo Indian tribes would be happy to see their sacred myths in "funny books." I think I stretched propriety enough by including two pages of mythology without approval.

Billy and Drew don't don costumes or regalia in issue #2 either, although they use their powers a bit more. In fact, their costumes, which we'll rarely use, won't appear until the end of our fourth story. Isn't that enough of a non-superhero approach to satisfy your cravings? <g> We won't show costumed heroes much more than a comic like SANDMAN or SWAMP THING does.

My one-sentence positioning for PEACE PARTY is: "Tony Hillerman meets Harry Potter with a touch of The X-Files." I don't think that's a bad place to be. These three properties all have large followings.

We're probably going to a graphic novel format, which should answer your plea for more sustained stories. The third story and up will have more characterization than the first two stories. The origin story was necessarily plot-driven—bad guys chase good guys from point A to B—but future stories will be less linear and more complex.

The one thing I can't answer is when we'll publish next. The problem isn't that I'm vacillating, but that the first two issues didn't sell well enough. I have to find a publisher or a funding source before we can do more.

To compensate, we've put several features on the website (see our Contents page). We have something like 4-5 text stories, a one-page comic-book sequence, two dozen Billy-and-Drew cartoons, sneak previews from upcoming stories, and the proverbial more. I'm publishing a newsletter and adding to the site constantly while writers and artists toil on more stories (in their spare time) and I seek funding. If anything, our fan base is growing even while we don't publish comics.

That's the scoop for now. Thanks for a fine review, and keep up the good work!